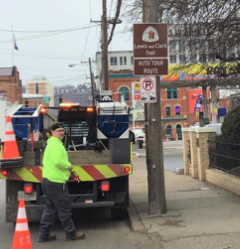 Three new road signs depicting the silhouettes of two buckskin-clad explorers signal Covington’s inclusion on a historic route that stretches nearly 5,000 miles through 16 states and traces one of America’s most famous expeditions , if not the most famous, in United States history.

The maroon signs – recently placed on Ky. 8 and specifically on West 5th Street, East 4th Street and Highway Avenue – are part of an expansion of the Lewis and Clark National Historic Trail, the route blazed by explorers Meriwether Lewis and William Clark during their famous exploration of the newly acquired Louisiana Purchase.

The Covington Public Works Department received an official track marker from the Lewis and Clark Trust, duplicated it twice, then installed all three signs earlier this month. The Trust promotes and preserves the trail in cooperation with the National Park Service.

“The new signs will enhance tourism throughout Covington, bringing attention to our town and our own historic preservation efforts,” said Keith Bales, assistant director of Covington’s Neighborhood Services Department.

The trail follows the route taken by explorers from 1803 to 1806 as they surveyed the Louisiana Purchase. The trail stretches 4,900 miles from Pittsburgh, Penn., to the mouth of the Columbia River near Astoria, Ore.

Traditionally, the expedition would have started in St. Louis, but preparations actually began in Pennsylvania, and the keelboat used during the expedition’s first year was launched from that point. To reflect these facts, 1,200 miles were added to the route in May 2019 when the Ohio River became an official part of the trail, increasing educational and recreational opportunities for tourists to discover in communities along its path. Kentucky was one of the first states to post signs on this additional road.

James Mallory, vice president of Lewis and Clark Trust, Inc., said travelers seek an “authentic” experience in the communities along the trail.

“When people hike the Lewis and Clark Trail, they want a cultural experience, an authentic experience, and local small businesses provide that,” Mallory said. “They want to visit local museums, local wineries, breweries, visit the farmer selling produce in front of his farm.”

A website, Lewis and Clark Travel, shows travelers where to stay and eat along the route, which includes 10,157 km of roads and 2,439 km of water trails. The website also lists local attractions and experiences, such as the Behringer-Crawford Museum in Covington. (Note that the website includes a way to submit more local attractions and tourism-related businesses.)

More information on the trail itself is available via the National Park Service.Town of Covington