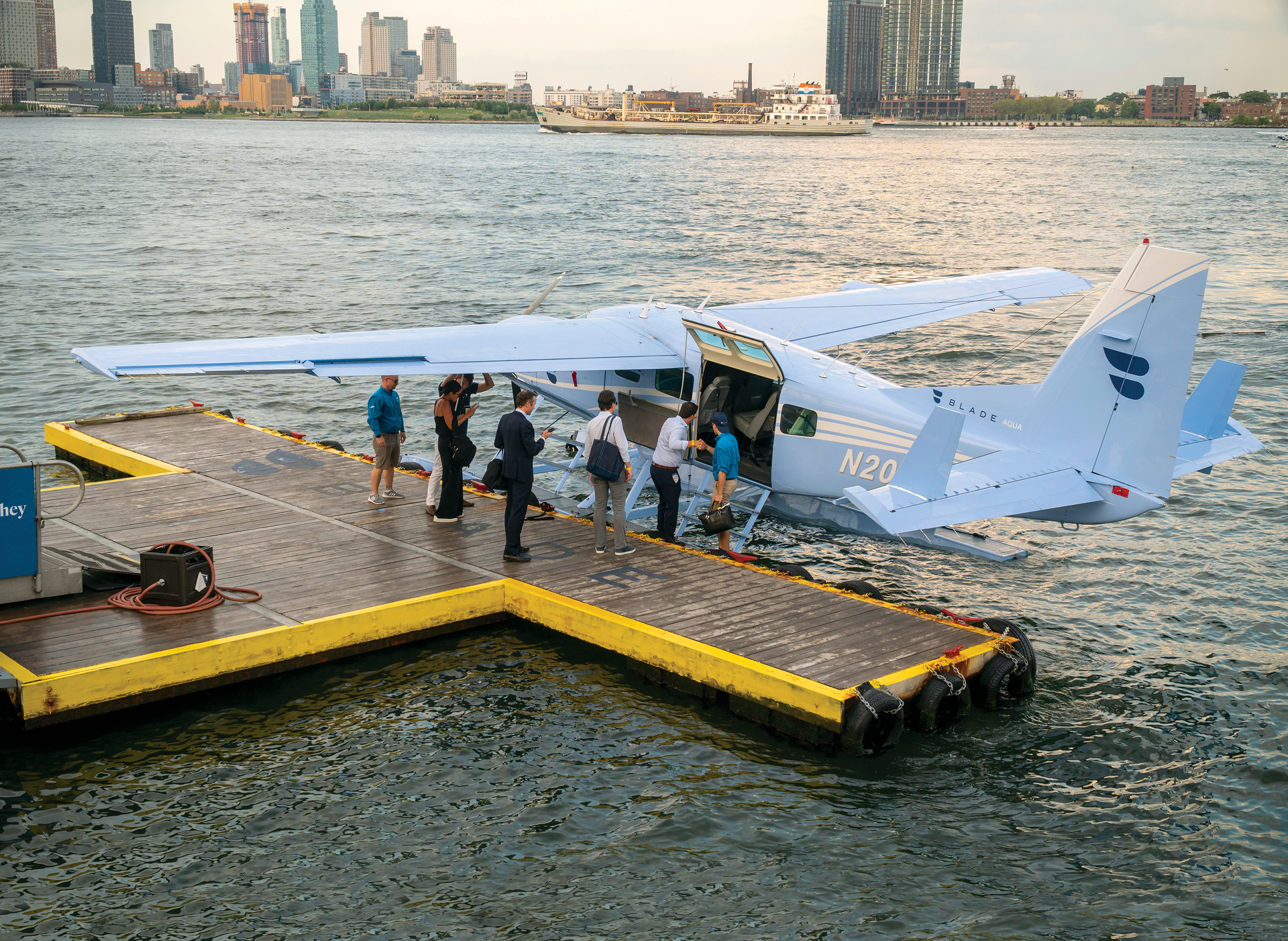 Seaplanes are motorized fixed-wing aircraft capable of taking off and landing on water. These aircraft are generally divided into two categories: seaplanes, which have one or more narrow floats (or pontoons) mounted under the fuselage to provide buoyancy without the fuselage coming into contact with water; and seaplanes, which land using their fuselage (or hull) as their primary source of buoyancy. Amphibious aircraft are a subclass of seaplanes that feature a retractable undercarriage that allows operation both on land and from water via a ramp.

Air service in a seaplane is unique in that it offers passengers the speed of an airplane along with the utility of a watercraft. It also allows pilots to access areas where conventional landing infrastructure cannot be easily built or is inaccessible with any other type of craft. For these reasons, the seaplane has established itself as a valuable means of air transport, leisure and air travel.

The first successful seaplane flight took place in Marseille, France on March 28, 1910 and is attributed to the little-known designer and engineer, Henri Fabre who is Hydroavion; The Duck (The Duck) traveled a distance of 500 meters.

In 1911, Glenn Curtiss received the Collier Trophy for his development of the hydroaeroplane, a land plane mounted on floats. He went on to develop the first successful seaplane with a hull as an entire fuselage, rather than an aircraft fuselage mounted on floats.

In the early days of aviation, there were few developed airports. Docks provided access to many places and boat docks were generally used. As seaplanes grew in popularity, they played a vital role in the development of the country’s aviation, economy, and transportation network. Commercial seaplane operations became a financially viable business, and corporations and airlines, such as Pan American Airways, lobbied for the construction of seaplane bases. Many of the new bases featured shore-bound floating docks, ramps for amphibious aircraft, and passenger and cargo terminals.

Primarily used for commercial air travel, seaplane bases saw heavy use for many years, but after World War II their use gradually declined, and by the 1950s they were relegated to secondary service, in as landplanes capable of flying greater distances. grew in importance and became the benchmark for air transport. Nevertheless, there are currently some 489 FAA private and public use seaplane bases in the United States.

A seaplane base is considered an airport located in a body of water such as a harbour, lake, river or creek where seaplanes, including amphibious aircraft, can take off and land. These bases provide the aviation, business and tourism communities with an operational base and support the community with economic, employment and recreational opportunities. The vital utility use of a seaplane extends to disaster recovery, search and rescue, water dumping on forest fires, environmental monitoring, cargo and cargo operations. passengers and many other special tasks.

While private-use seaplane bases can be public or private, these bases are used for general and private aviation, but are not open or available for use by the public, or for scheduled air travel.

Scheduled and non-scheduled passenger service within the state has proven lucrative where ground transportation or boat service is time consuming or simply does not exist. This is largely the case with public-use seaplane bases located on a city’s waterfront.

One of New York’s oldest airports was, in fact, the East River, where the Downtown Skyport was built as a seaplane base in 1936. Located at the foot of Wall Street between Piers 11 and 12, the Downtown Skyport predated both LaGuardia (1939) and Idlewild-JFK (1948) airports and was primarily used to ferry Wall Street executives for a time-saving and simple commute between home and office.

In the mid-1930s, a seaplane ramp was built at East 23rd Street in New York City and the base became part of a marina which opened on April 18, 1962. New York Skyports Inc. Seaplane Base (6N7)which officially opened in 1946, is located on the waterfront of Skyport Marina on the east side adjacent to 23rd Street and FDR Drive.

This operational skyport for public use is owned by the New York Bureau of Marine and General Aviation and is located in the Skyport Marina. It is Manhattan’s only seaplane terminal. Its north/south (water) runway is 10,000 feet long x 1,000 feet wide. Pilots must complete a test flight with an authorized member of the Northeast Seaplane Pilots Association prior to use of the seaplane base. A 3-blade propeller is required on all seaplanes, and pilots must taxi 1,000 feet off the Manhattan side before beginning takeoff. In addition to general aviation, New York Skyports Inc. serves as a commercial hub for Tailwind Air, Southern Airways Express and Tropic Ocean Airways which offer charter, scheduled and seasonal services.

Twelve nautical miles northeast of New York, overlooking Eastchester Bay, is the operational center Evers Seaplane Base (6N6), located at Evers Marina and Seaplane Base in the Bronx. Founded in the 1930s by the late Carl Evers, Evers Seaplane Base is a public-use seaplane base, privately owned by Carl Evers’ son Charles. Continuing his father’s business, Charles Evers was quoted in a 2014 New York Times article that his father was a barnstormer and aviator who flew with Howard Hughes and taught Katharine Hepburn how to fly, and that he also earned a good income flying Wall Street financiers by seaplane from the Downtown Skyport to many vacation destinations.

Evers Seaplane Base’s all-around airstrip is 5,000 feet long x 400 feet wide and is 4.4 nautical miles from LaGuardia Airport. A busy seaplane base for general aviation, charter flights, and as a seaplane storage facility in its early days, and by the 1950s the base had five ramps and about 40 seaplanes. In the late 1960s, however, Evers Marina significantly shifted its operations to a harbor for fishing vessels, recreational boating, and storage facilities. Aeronautical charts today show the marina as one of the last seaplane bases in the metropolitan area.

The Sands Point Seaplane Base (7N3) is a public-use seaplane base overlooking Manhasset Bay owned by SHM Capri LLC (at Brewer Capri Marina) two miles northwest of Port Washington, Long Island. In the late 1930s, the first scheduled transatlantic commercial air service to the United States began at Port Washington with Pan American Airways Martin and Boeing seaplanes landing regularly at Manhasset Bay. A general aviation seaplane base, its two water runways, 1W/19W and 12W/30W, are both 6000 feet long x 300 feet wide. All landings are 2,000 feet from shore, except in emergencies.

The EDO Seaplane Base (4NY2) is a private-use seaplane base located in College Point, Queens and is owned by EDO Corporation. The EDO Aircraft Corporation was established in 1925 and is named after its founder Earl Dodge Osborne. EDO was the main producer of aircraft floats which were developed for a host of popular civilian aircraft, and after the outbreak of World War II, EDO products transitioned to military aircraft, their leadership in the field continuing until in the 1970s.

Seaplane Base Pvt Sealanes-Jamaica Bay (NK30) is a private seaplane base located along Mill Basin Inlet, on a peninsula adjoining Jamaica Bay in Brooklyn. In operation since 1980, NK30 is 6.2 nautical miles from John F. Kennedy International Airport.

This private use only seaplane base utilizes two 5000 foot long x 500 foot wide water runways. Operations are conducted under visual flight rules, with clearance required prior to landing

Although only a few seaplane bases remain in the immediate New York metropolitan area, the versatility of seaplane bases extends to all 489 public and private seaports in the United States.

Whether for public, private, or commercial use, seaplane bases are particularly useful for private and charter transportation, as these bases can increase the capacity of land-based airport operations by reducing congestion. This is particularly relevant in the wake of the COVID-19 pandemic, where private flight operations have seen a substantial jump in popularity both during the pandemic and as a result of its fallout in today’s post-pandemic environment. today.