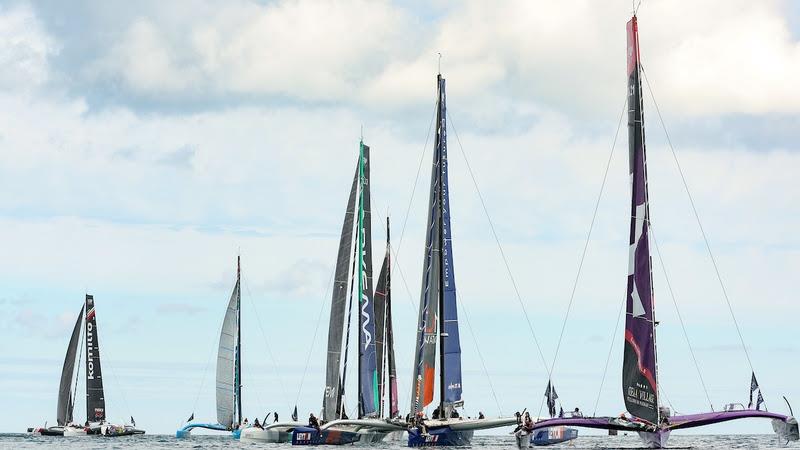 As the Pro Sailing Tour prepares for its first-ever visit to the birthplace of British yachting at Cowes, and the challenging 515-mile course to get there, the crews of the seven Ocean Fifty foiling trimarans had the opportunity to reflect on two days of intense coastal racing in the bay of Saint-Brieuc.

Sailing in the legendary light winds and strong currents the region is famous for was key to success, with starts proving equally crucial to securing a podium finish or winning.

After the effervescence of activities on land in the port of Armor, in the open sea, the crews were fully concentrated on navigation in the light airs of the bay of Saint-Brieuc around the Saint-Quay islands.

Adding to the challenge, high tides hampered progress towards the course marks, with the Ocean Fifties fighting a constant battle of tacking and gybing around the two coastal courses and the complex challenge around the canisters set by the committee. race.

Primonial was disappointed with its results in the bay of Saint-Brieuc, and Sébastien Rogues will be keen to do well during the next race in Cowes, Komilfo and Solidaires En Peloton-ARSEP also being in the game to win in the waters. English.


The Cowes course will be a real test

As the clock counts down to Sunday’s start at 7:00 p.m. CET, the crews anticipate a strategic and physical race of more than 500 miles. After a short stage to show off the multihulls in front of the spectators in Armor, the fleet will set sail for La Roche Gautier to the north-east of the island of Bréhat, before leaving Sark in the Channel Islands on the port side.

The bows of the multihulls will then turn towards Finistère and the cardinal buoy of the Grande Basse de Portsall, before the crews set off across the English Channel to circumvent the legendary Wolf Rock lighthouse.

From there it’s an ultra-technical race due east along the south coast of England to the Isle of Wight, managing the many headlands and tidal gates to the entrance to the Solent, the Pro Sailing Tour reserves the right to shorten the course. at The Needles off the Isle of Wight, weather permitting.

“We look forward to offshore at Cowes,” said Goodchild. “I started my offshore sailing career there at the Artemis Offshore Academy in 2010-11, so it will be great to go back there with my own project and sail the Solent again, I can’t wait!

A cannon fired at the Royal Yacht Squadron from Cowes will salute the winners, and all crew will receive a warm welcome from the Royal London Yacht Club and the Cowes Harbor Commission on their scheduled arrival at midday on Tuesday.