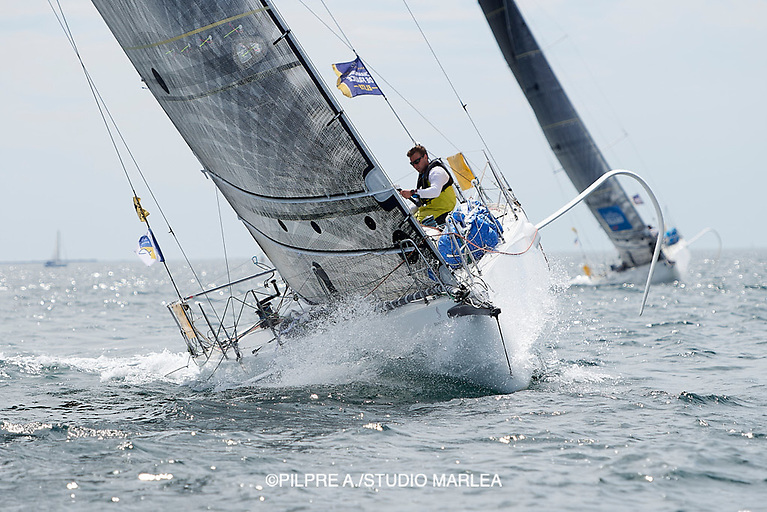 Learning point this year! Take a break and build rest into your schedule.

Kenny was told a lot about it at the start of the year, but like most stubborn offshore sailors, he politely chose to ignore it and soon found out why.

After the successful Round Ireland race on Darkwood, he only had a few days left before heading to the airport for another race, this time as a trainer of a brand new Sunfast 3300 for a Polish based owner in France.

Believe the hype, people; Dublin Airport to travel from in early July was as the media described it… NUTS! Despite numerous travel delays, Kenny made it to La Trinité Sur Mer for the La Trinité to Cowes race, around 300 double-handed miles on a brand new ready-to-run Jeanneau SunFast 3300. Kenny’s mandate was to guess the performance of this boat and coach the Polish Skipper in offshore racing with a reduced crew. The course was familiar to Kenny, until through a regular course of the North West of France as he experienced many times on the Circuit Figaro.

On board the SF330 for La Trinité in Cowes

A quick lunch with his compatriot Tom Dolan from Le Figaro where the advice was: “You just have to sail like Le Figaro!” Which they did, showing impressive speed compared to other 3300s. Kenny and his student used their Fractional Code 0 sail to its full advantage from the start in LA Trinite. A navigation error by Penmarch put the duo on the back foot but using the Adrena software to its full advantage; these errors put the SunFast 3300 MyWay back at the top, crossing the famous Pointe du Raz tidal passage!

As the tide turned against them past ‘Le Raz’, sailing through the rock around the ‘Chanel du Four’, the pair put significant miles on their rivals they held off at Cowes! A successful first race for the boat and a happy owner who now had a full sail selection plan and updated polars on Adrena thanks to Kenny’s coaching efforts…

With rest in mind, Kenny flew straight from Cowes to Cork for Cork Week to sail his coveted 1720… A nice break from offshore sailing and a chance to sail ashore with friends despite the wait due to Covid over the past few years, Cork Week has done not disappoint! We remain focused on offshore sailing, but watch the video of the week below….

Kenny’s boat, number 20 of the Academy, had been chartered by a Swiss team for the Dhream Cup in France. A few days of preparation were necessary before the event. While most people spend their birthdays with fun and relaxing activities, it was business as usual in Port La Forêt, cleaning and polishing ahead of the Solo Concarneau.

With relatively strong winds forecast, the Figaro fleet merged in Concarneau for this last shakedown event; many skippers chose to switch from using their new sails for the Solitaire to slightly older sails so as not to subject the new sails to unwanted stress or put anything at risk before the Solitaire. A modified course took the skippers out of Concarneau, north through the notorious Raz de Sein tidal passage just south-west of Quessant before a long leg south to Les Sables d’Olonne before returning to the north to Concarneau, with the current weather forecast it was basically a beaten north, a wide reach south before heading home.

For Kenny, racing was all about getting back in the boat, feeling like Bambi from the start; Kenny was disappointed by some stupid mistakes in Port La Forêt Bay. However, he quickly got back to it, stepping in slowly but surely at every stage of the race. Winning on the night but the most northerly mark, Kenny rounded alongside fellow Irishman Tom Dolan. Downwind to Les Sables via the Birvideaux lighthouse, Kenny took places one by one with promising boat speed, which meant that Tom and Kenny passed each other again at the Petit Barge buoy off Les Sables.

With the wind dying as expected as they approached Concarneau, Kenny crossed the line in 17th out of 34 starters, a solid result for a shakedown.

There is not much time left before the major event of the year for the Figaro fleet, the Solitaire du Figaro! The 2000 mile solo marathon is no joke. This event starts next week; check back later for a full update; in the meantime, Kenny and the rest of the Solo Sailors will rest and sleep!