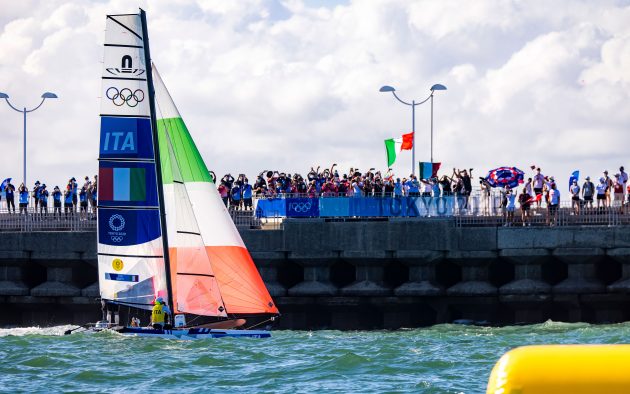 The Italian duo of Ruggero Tita and Caterina Banti have been the star of the Nacra 17 class since their transition to a full foiler after the 2016 Olympic sailing competition and they supported that domination with an incredibly impressive week in Tokyo 2020.

The consistency of the two best teams of the week was such that it was only the second British team of John Gimson and Anna Burnet (2020 world champions in the class) who could realistically challenge the Italians for the gold medal. in the final medal race. of the competition.

Unusually, neither the Italians nor the British got off to a good start, both well behind the line. Maybe this was the occasion, maybe the teams were focused on each other but both had to turn to port shortly after the start to try to find some fresh air.

To have a chance of winning gold, the British had to beat the Italians with several boats between them and in the first round of the mark, although the British just managed to sneak past the Italian team, the gold was realistically out of their reach unless they could somehow pass most of the boats in front of them and the Italians don’t gain any berth.

With the gold and silver nearly over on the starting line, attention might turn to the bronze fight which turned out to be where much of the action would take place.

Germans Paul Kohlhoff and Alica Stuhlemmer started the day in third place, but a wind / downwind fault from the start saw the German team penalized and by the time they left for the first leg they were in the tail peloton by some distance.

At the first mark, Rio silver medalists Jason Waterhouse and Lisa Darmanin (AUS) placed sixth and, as the Germans struggled to recover from the penalty in 10th place, the Australians were in position. of bronze medal.

Downwind, Italy passed Great Britain and took the advantage, making the gold even more secure for Tita and Banti. Germany were still a long way off in last place, desperately needing to move up or the Australians to drop the standings for this bronze medal.

Towards the start of the last windward leg, Germany passed Brazil in a critical move that took them back to bronze if things could stay that way.

Lange and Saroli (ARG) won the Medal Race even though they did not retain their Olympic title, a great way for this popular team to end their campaign. Great Britain crossed into fifth position, a place ahead of the Italians who started to celebrate gold. Silver for GBR, bronze for Germany, Denmark just ahead of Australia for fourth place overall.

It was a truly impressive performance from the young German team who seemed to have ruined their medal chance from the start. But they kept their cool and backed off just enough to secure the final medal.