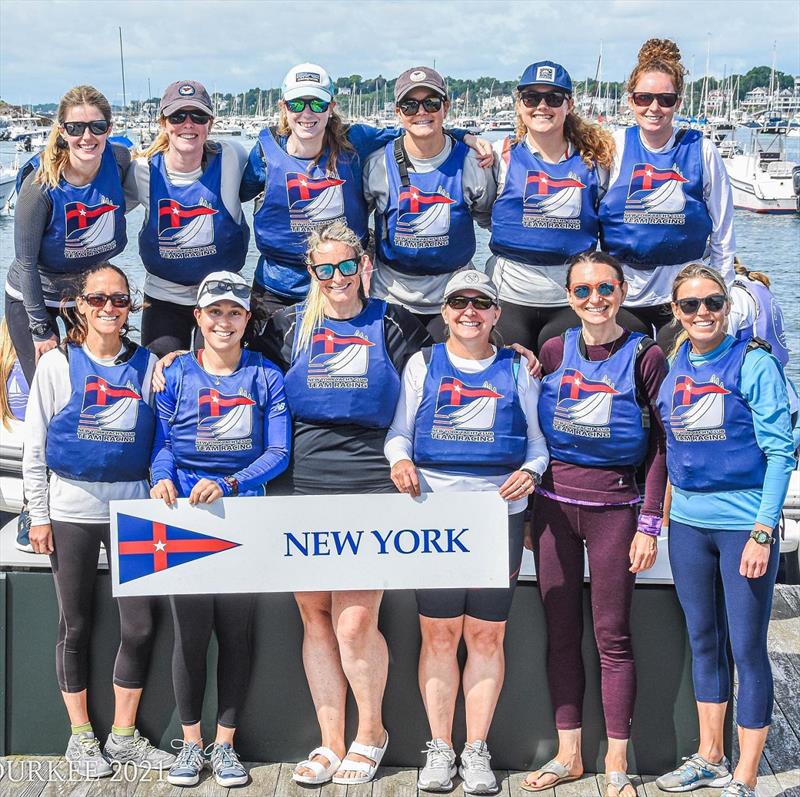 The Corinthian Yacht Club’s first invitational women’s national team race for the Thayer Trophy drew six teams from across the East Coast and all the way to San Diego to compete in a three-on-three boat format, in keelboats with spinnakers, the first all-female team racing event of its kind.

A total of 69 women took part in 50 races over the weekend of June 26-27. A constant southwesterly wind blew through both days, ranging from low to high teenage and occasionally gusting to 20mph. After competing in 30 races in two round robin races on day one, the Eastern Yacht Club looked dominant, winning nine out of ten races, but the New York Yacht Club (NYYC) came out strong on day two after winning only the half of his shopping on the first day.

The NYYC team have won all nine of their repechage races, with the semi-finals and finals taking first place on the podium.

“We were getting rid of a bit of the rust on day one,” said Emily Maxwell, NYYC team captain, after noting that the event was the first time the three skippers had sailed together as a team. “At the start of the second day we talked about being consistent and sailing fast so we could be in a better position on the course.”

Team racing is an exciting and growing game in the sport of sailing. There are currently over 20 national adult team racing regattas on the calendar each year in the United States, but very few women’s events. Until the Corinthian Thayer Trophy, there was no 3v3 women’s team with spinnaker. The use of spinnakers adds a degree of difficulty which has become a hallmark in the upper echelons of team racing competitions.

According to the chair of the Thayer Trophy event, Miranda Bakos, the Corinthian saw an opportunity to fill that void. “When we were planning our program of events, we felt like there was a piece missing from the women’s team race calendar,” she said. “It sounds like a pretty straightforward idea, but we didn’t realize how powerful the event would be. With the age range 18 to 65, each woman’s story as to why they were so grateful for participating in the event was as powerful as the next one. ”

While the action on the water was exciting, the experience out of the water was just as important to regatta organizers and competitors.

“It was the first sailing event we organized with social media [since Covid]”commented NYYC’s Maxwell, who went on to say how awesome it was to be with and against women she competed with in high school and college.

The Corinthian Yacht Club plans to make the Thayer Trophy an annual regatta with eight teams competing. Due to the uncertainty of Covid, the capacity for this year’s event was limited, which put some teams on a waiting list. The trophy itself honors the significant contributions of Joan and Elynore “Elli” Thayer to women’s sailing – Joan as an avid one-design skipper and National Women’s Sailing Association conference organizer, and Elli as the first female skipper of class 110 and the Marblehead Racing Association. officer for over 20 years.