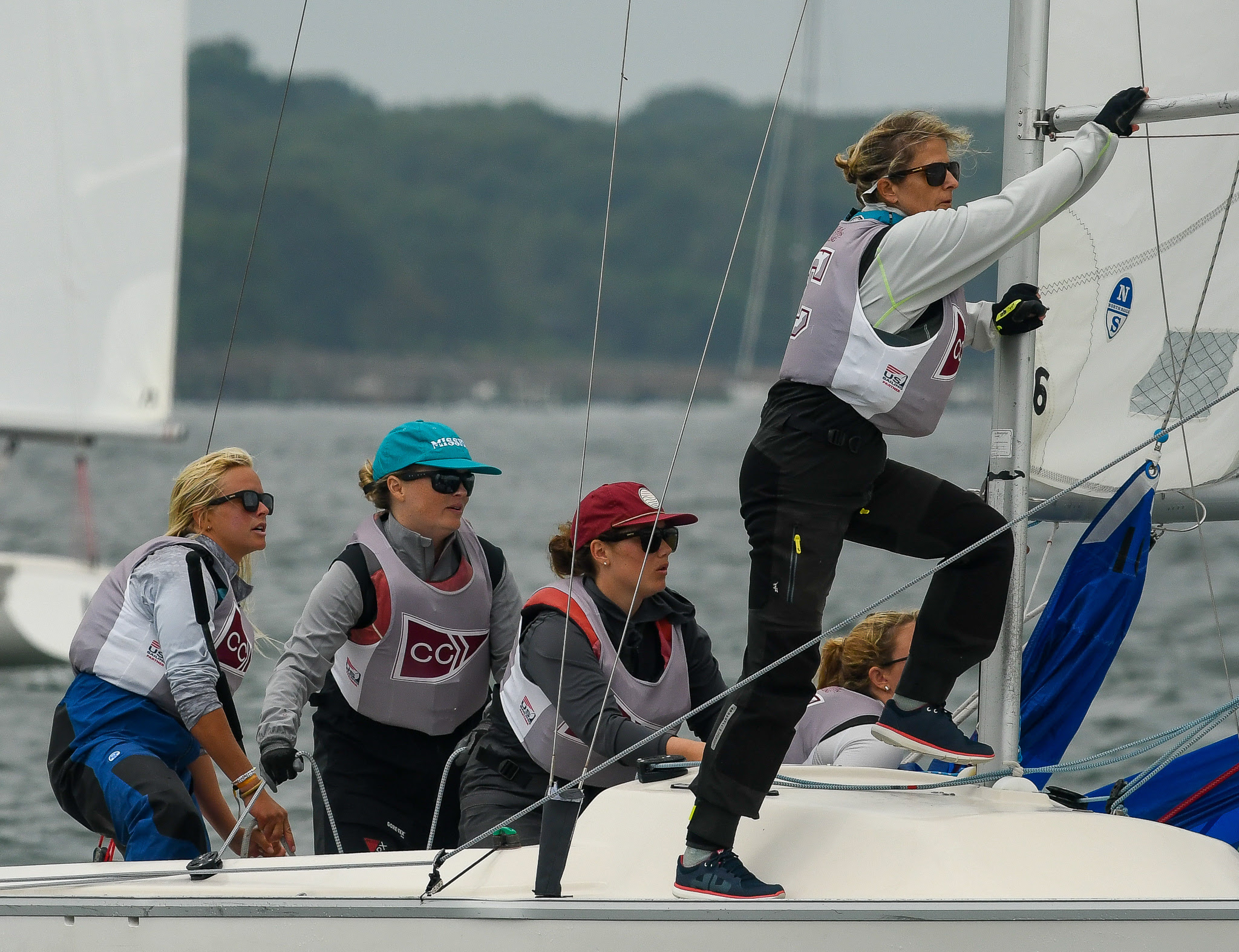 By the Yacht Club of New York

“We definitely kept it consistent,” says Toppa (above, far left), who grew up in Fort Lauderdale, Fla., but now lives in Newport and is a member of the host club. “We were just like, ‘Finished in single digits and just sail smart, sail fast. That’s exactly what we did, so we’re very happy with how it turned out.

The inauguration New York Yacht Club Women’s Championship featured 20 teams of four or five women from across the United States, sailing in supplied one-design Sonar keelboats. The Club received over 40 expressions of interest to participate in the regatta, making it an accomplishment just to be invited. The regatta ran from Friday June 17 to Sunday June 19, with the winner receiving the Joan H. Towse Trophy, named after the avid sailor, member of the race committee and late wife of former New York Yacht Club Commodore, Robert C. Towse Jr. .

The Toppa’s College of Charleston Yacht Club team, which included Kate Nota, Maisie MacGillivray, Jo Ann Fisher and Emmy Horowitz, was on the hunt throughout the 11-race regatta but only took first place. until after the final race. navigated. In fact, it wasn’t until long after the team made landfall that they found out they had won the regatta.

“We kind of said, ‘Let others make mistakes, because it’s inevitable,'” Toppa said. “And we made a ton of mistakes, but we came back from that. It was always, the next moment, the next opportunity. My team was amazing, they helped me so much. They kept me calm, they made the right decisions and had a cool head, it was dynamic out there, so much current, so many shifts, but we did what we could, sailed with a good head on our shoulders.

Heading into the final race, it was Erin Maxwell’s 11 Less Distractions team – named after the team’s children aged 3-9 – who had controlled first place for the majority of the regatta . But the final race was not successful for them.

“The biggest mistake was that we ended up committing a foul at the [second] brand weather,” says Maxwell, a former college All-American draft pick at Dartmouth and 2008 World Champion in the women’s 470 class. “So we had to run two circles and that’s the points realistically [that we needed to win]. We also had a bad downwind first leg this race. We were in the middle of the upper fleet before that. A boat rolled us, then it was really tight at the leeward buoy, and we were just out of the way on a platoon of boats. You can’t win every race, and that was just bad for us.

Despite her background in college and on the Olympic campaign trail, Maxwell came to the event with very low expectations.

“This is the second regatta I’ve been to in the past 10 years,” said Maxwell. “Over the past 10 years, I have had five children. Now I have decided that I would like to do some more sailing and was very happy that my friends agreed to sail with me. My crew members probably haven’t done as much sailing as they would have liked in recent years, all with young children like me.

Maxwell’s team (right) included Isabelle Kinsolve Farrar, with whom she won this world championship 14 years ago. Until the final race, they were the team to beat, with no result worse than eighth place.

“Our team worked very well together and did a great job communicating and shifting gears in difficult conditions,” Maxwell said. “I think we surprised ourselves. We were all shocked to still know how to sail and really enjoyed it. We are already looking forward to the next event.

The joy of the weekend was contagious. It was written in the big smile on Susan Backus Starr’s face at the awards ceremony held on Sunday afternoon overlooking Newport Harbour. She took part in the regatta with her three sisters (left), as they have done for four decades.

“Heidi, our skipper, and Amy, the youngest sister, have been sailing together for 56 years,” said Backus Starr. “We started sailing together as a quartet in 1982 in a J/22. In 1985, when the first Rolex Keelboat was to be in Newport, we bought a J/24 to campaign [for that event] and since then we have been sailing on keelboats. When we heard the event was going to be held here, we knew we had to try to find an invite. We were delighted to have one.

The Backus sisters’ dream of a win or even a podium crumbled in a sneaky, gusty breeze on the final day. But they nevertheless achieved one of their major goals for the regatta.

“The competition was incredible,” Backus Starr said. “It was a great opportunity to meet young sailors, like two generations below us, and see if we could hang out with the middle schoolers. Everyone wants to win, but we definitely felt we held on.

Indeed they did, winning a race, taking second place twice and, when the final points were counted, finishing seventh, just 10 points off the lead.

The next edition of the New York Yacht Club Women’s Championship is tentatively scheduled for June 2024. The invitation application process will begin in late 2023.