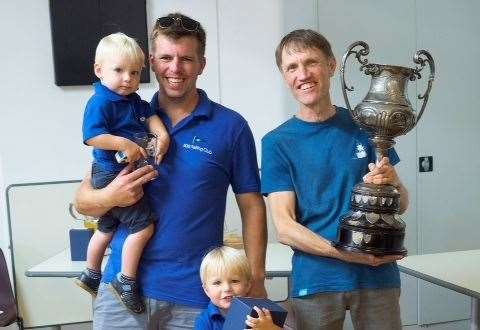 A flotilla of dinghies, yachts, catamarans, windsurfers and foils surrounded Sheppey on Sunday as they tackled the grueling 50-mile race around the island.

Isle of Sheppey Sailing Club spokesman Tim Bell said: “The weather was perfect. The force 3-4 wind from the east was an ideal sea breeze, although it did get a bit lumpy at Shellness at the mouth of the Swale with difficult conditions.

“However, the rising tide helped the craft navigate the Swale to Kingsferry Bridge.”

As usual, many yachts had to take their masts down to get under deck or had to be driven through.

Club members Chris Goymer and Paul Wiseman finished first in 2:32 and won most trophies with their Dart 18 catamaran at the 64th annual challenge.

Local boy Jo Baker outdid himself by securing third place on handicap in another Dart 18.

It was the first time that relatively new wind-foilers participated. Their fastest competitor, Mark Lunan, completed the course in 3:13.

Lee Marriott won the single-handed dinghy prize in his boat Blaze, completing the course in “a burst of glory”.

None of the competitors managed to beat the course record of 1h52 set by a Hobbie Cat in 2010. The record for a monohull is still 2h17.

But Mr Bell said: ‘It was still a very successful event with 50 boat and craft entries.

He admitted: “The beach team struggled to get the boats out of the water at the end of the race as they returned to the Marine Parade clubhouse, Sheerness. There was very little beach to high tide when the waves crashed over the pebbles, it often took up to eight people to get each boat out of the waves.

There was help from the Medway Raynet group. Ken Dickson oversaw radio communications and Sheppey’s Event Management Unit (Emus) was on hand.

This year, each boat has been equipped with a GPS tracker to follow its progress in real time on the race website. The event is the UK’s longest annual dinghy, cat and board race.

Dismantling and disposal of end-of-life vessels