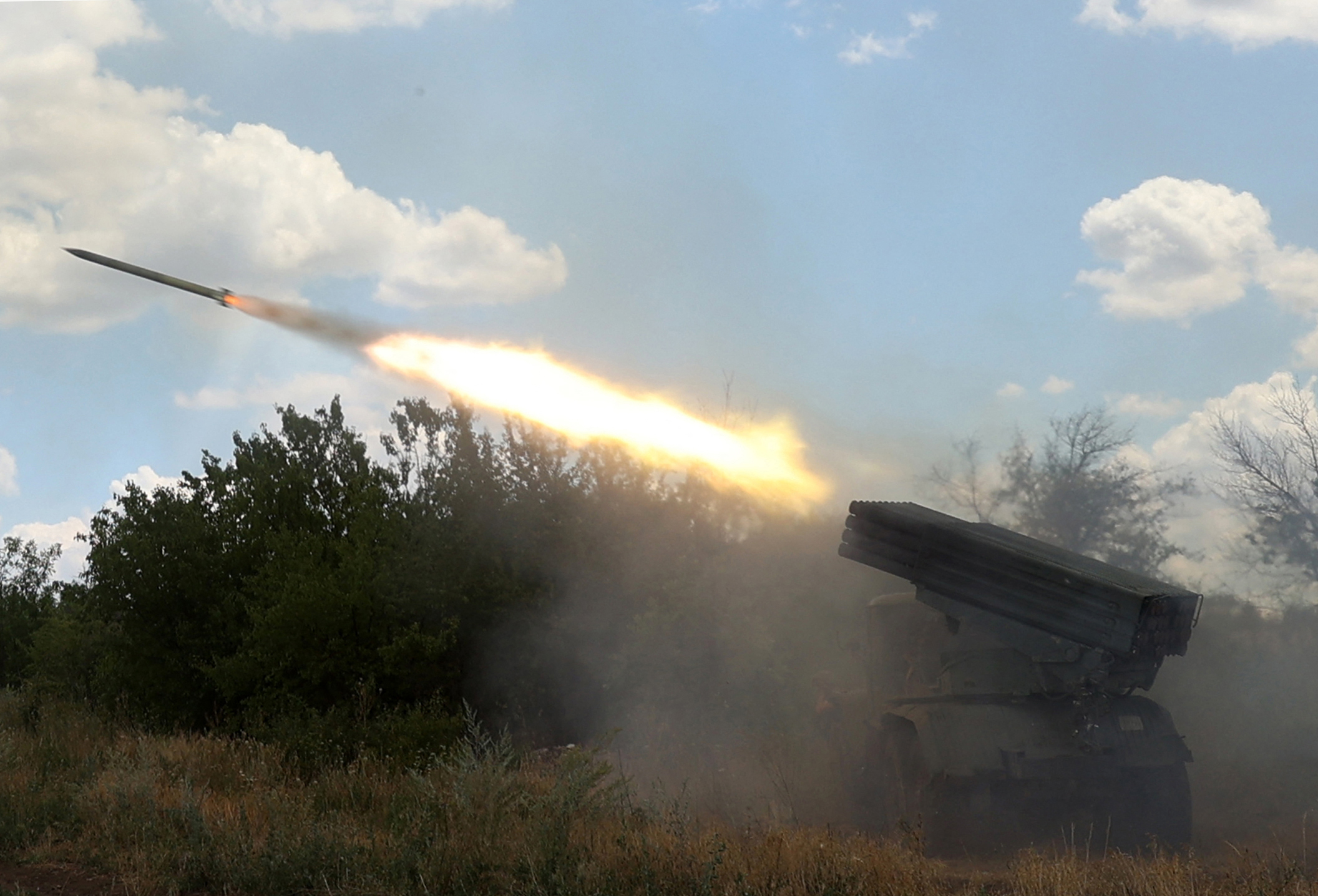 The following is NewsGuard’s summary and translation of major news stories from Russia’s Channel One public broadcaster. NewsGuard presents these articles in the order in which they appear in the program.

National police of the Lugansk People’s Republic helps in Donetsk

Lugansk fighters, who together with the Russian army liberated their native lands from Ukrainian nationalists, are now helping their neighbors in the Donetsk People’s Republic. Among them are experienced soldiers who have been in the army for several years, as well as those who took up arms at the beginning of the special operation: miners, engineers, teachers… Together with the Russian army, they are already on the outskirts of (the cities of) Soledar and Artemovsk. These are strategically important points – they provide operational access to Kramatorsk and Slaviansk.

Meanwhile, the national forces of the Republic of Donetsk, supported by our military, are approaching (the town of) Avdeevka. The people of Donetsk are strongly opposed to the nationalists, who have entrenched themselves in their city and made it their base. It is from there that they daily attack peaceful districts of Donetsk. Amir Yusupov has more in this report.

“It was not a simple task – to destroy the nationalists while protecting the power plant,” Yusupov reported. “The Uglegorsk power plant is one of the largest in Europe and the largest in capacity in Ukraine. It is very important for the Donetsk People’s Republic.”

Peaceful life is restored in the regions where the forces of the people’s republics – with the support of our military – have already (been) liberated from the neo-Nazis. The Russian regions contribute to this: many have taken the sponsorship of certain cities of the Donbass.

Particular attention is paid to Mariupol, hard hit by the nationalists. Deputy Prime Minister Marat Khusnullin reported to (President) Vladimir Putin this week on what is planned.

As part of this week’s special operation, the Federal Security Service foiled the hijacking of a Russian military plane. The hijacking was attempted by Ukrainian military intelligence and its Western handlers. But their plan failed miserably. kyiv probably wanted to present the hijacking of this plane as a great victory, at least in terms of information. It’s understandable: when real successes are rare – or more precisely, when there are none at all – they have to invent fake ones.

The team of experienced showman (Ukrainian President Volodymyr) Zelensky, who largely works for a Western audience, actively participates in it. But his team isn’t having much success either. The president and his wife took part in a photo shoot for a popular fashion magazine, but it only caused a wave of irritation.

And another curious photo appeared in the British newspaper The temperature. The newspaper used a photograph from a rehearsal for our own Navy Day parade to illustrate an article about how Zelensky was planning an attack on Kherson. This fact is mentioned only in small print in the caption of the photo – the important thing is the effect.

The West hurts its own citizens by introducing sanctions against Russia

And Eurostat has the new inflation figures to prove it. Prices are rising for almost everything, especially electricity, which is up 40% on average, and food, which is up 10%.

As far as individual countries are concerned, the worst situation is in the Baltic countries: inflation in Estonia, Latvia and Lithuania is above 20%. Spain, Belgium, Greece, Slovenia, Slovakia, the Netherlands and Cyprus are not doing so well either, with inflation above 10%.

The United States is also trying to cope with rising prices. Experts from the International Monetary Fund have admitted that the US economy has virtually no chance of avoiding a recession. Commerce Department data shows that this recession has already begun – it has been in effect for the past two quarters. But economists see a way out of the global crisis, for both Europe and America.

“You can see in Italy today, with the fall of the Draghi government, that we can’t even have political stability at the national level,” said US economist Jeffrey Sachs. “European governments will now fall one after another. In the current political crisis, [U.S. President Joe] Biden will lose one or both houses of Congress in November. The clown [British Prime Minister] Boris Johnson was eventually expelled, in part due to the worsening economic crisis. And so we have no political stability. The war in Ukraine must end. And it won’t end with the defeat of Vladimir Putin, no matter how many times this nonsense is said by [German Foreign Minister Annalena] Baerbock, Biden or anyone else.

“The war will end when NATO accepts that it will not expand for the good of Ukraine, and when there is a negotiated outcome. Therefore, if we want stability and peace, we must end the war – not on NATO terms understand that this war started because the US insisted on expanding NATO eastward which is totally irresponsible and totally contradicts the commitments made towards Gorbachev and Yeltsin. I was there at the time: there was a clear commitment against NATO’s eastward expansion, and certainly not Ukraine or Georgia. So our own recklessness is now at the origin of this unprecedented instability.”

In the West, at least in the White House, they see the problem differently – in terms of “cancellation culture”. By all accounts, there is a recession in America, but Biden and his team remain stubbornly blind. What do ordinary Americans and senior Biden party officials think of all this? Georgi Olisashvili has this report.

One of the women interviewed at a trailer park said, “We wanted to rent an apartment and were looking at the options available to us. In the end, we only had enough money to buy a trailer and come here, because the rental prices right now are just crazy.”

Putin takes part in the main military and naval parade in St. Petersburg

The city of St. Petersburg is the subject of special attention today. This morning a grand naval parade took place in the “capital of the North”, with stately ships on the roadside in Kronstadt and a formation of keelboats on the Neva River. There were 47 ships and submarines and four dozen planes and helicopters in the sky.

This parade has only been held for the past six years, but it’s impossible to imagine Navy Day without a great show. This is largely thanks to the team at Channel One, who each year bring this celebration to viewers. But the main focus, of course, is on the heroes of the occasion, anyone associated with the Navy.

Our correspondents Ivan Prozorov and Alyona Germanova were at the parade.

In the report, Putin addresses the navy: “Dear comrades! I congratulate you on Navy Day.”

Members of the nationalist group “Kraken” killed in Kharkov

New information has emerged about the Donbass special defense operation. Our Ministry of Defense reported that a temporary base belonging to the nationalist group “Kraken” in Kharkov was attacked with high-precision weapons. As a result, at least 350 fighters were extinguished.

And in the Kherson and Nikoleav regions, the Russian air force destroyed up to a hundred nationalists. Another 50 enemy soldiers, from the Ukrainian army’s 72nd mechanized brigade, were eliminated in the Donetsk People’s Republic.

Ukrainian forces fired on a detention center in Donetsk

The kyiv regime has committed another cynical war crime. A few days ago, the Ukrainian armed forces fired HIMARS rockets at the detention center in the town of Yelenovka, in the Donetsk People’s Republic. They directly hit the barracks where nearly 200 Ukrainian prisoners of war, including soldiers from Azov, were being held. The toll is 50 dead and more than 70 seriously injured.

kyiv has always blamed Russia for everything, even though it was our army that kept these fighters alive, forcing them to lay down their arms. In Ukraine, however, they show no mercy for their own people and take lives because of their clumsy and bloody provocations. Remember, for example, Bucha or the rocket attack on Kramatorsk station. The reality is that kyiv and its Western handlers are committing mass murder against their own citizens, and their motives are clear: forever silence those who know too much.

According to our Ministry of Defense, Russia has sent official invitations to experts from the United Nations and the International Committee of the Red Cross to investigate the attack on the detention center in Elenovka. Dmitry Tolmachev has more in this report.

One of the prisoners interviewed said: “I woke up to the sound of an explosion. I turned around and there was a second explosion. Then I realized everything was on fire. Everyone was trying to escape.”

Senior Warrant Officer Vasiliy Osipenko supplied ammunition to a tank company. During one of his flights he came under heavy enemy fire and was seriously injured, but despite this he drove a vehicle full of shells out of the fire, avoiding heavy casualties.

Anatoly Volkov, an artilleryman of the 2nd Army Corps of the People’s Militia of the Lugansk People’s Republic, started as a loader. He recently became a surveyor, responsible for ensuring that the ranks of artillery are correctly positioned on the ground. Thanks to the competent work of Anatoly, the fighters eliminated several nationalist strongholds and dozens of items of their military equipment.

Major Mikhail Ponamorev, deputy commander of the Independent Tank Battalion of the 2nd Lugansk People’s Militia Army Corps, has been defending his native Donbass since 2014. During the special operation, he liberated Borovskoye, Rubezhnoye and Novoaidar. In one such battle, a unit under Mikhail’s command crossed a river to provide a bridgehead for the main forces. The tank battalion completed the task quickly and without losses.