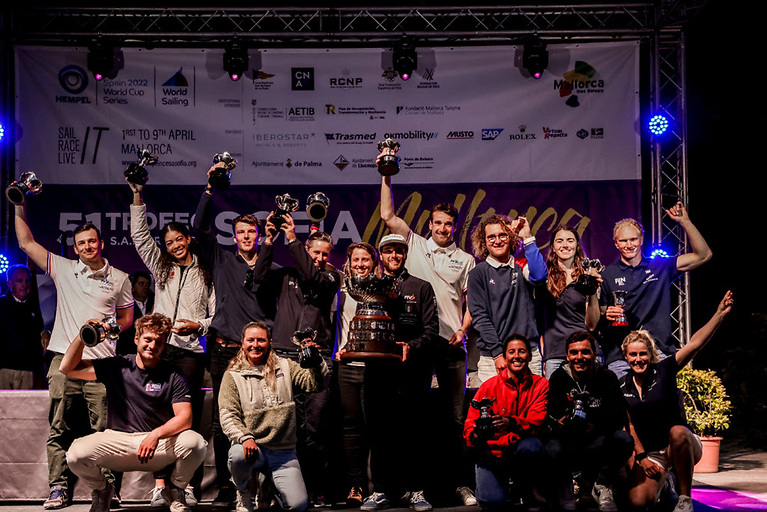 The awards ceremony for the 51st edition of the Trofeo Princesa Sofía Mallorca has come to an end. The week-long event was the first major international event for the Olympic classes since the 2020 Summer Games in Tokyo and is the first regatta of the 2022 Hempel World Cup series.

Organized at Ses Voltes in the city of Palma, the award ceremony took place in the presence of some of the main authorities of the island: the Minister of Sports of the Balearic Islands, Fina Santiago; the Minister of Tourism of the Consell de Mallorca, Andreu Serra; the deputy mayor of the town hall of Palma, Joana Adrover; the sports councilor of the town council of Llucmajor, Simó Adrover; and the president of the Balearic Port Authority, Francesc Antich.

Italian sailors Ruggero Tita and Caterina Banti, of the Nacra 17 class, 2020 Olympic gold medalists, received the trophy as winners of the 51 Trofeo Princesa Sofía Mallorca. During the ceremony, the top three from each of the ten Olympic classes also received their awards.

During the ceremony, the organizers of the Princesa Sofia Mallorca also paid tribute to the Ukrainian people in these difficult times, presenting a plaque to the three sailors from this country participating in this edition, as a sign of solidarity.

The countries with the most medals in this edition are France and Great Britain (6), followed by Italy (4) and Spain (2). The French sailors won three gold medals and the British two.

The regatta is organized by Club Nàutic S’Arenal, Club Marítimo San Antonio de la Playa, Real Club Náutico de Palma and the Balearic and Spanish sailing federations, with the collaboration of the International Sailing Federation. It has the support of the Government of the Balearic Islands, the Mallorca Turisme Mallorca Foundation, AETIB, Mallorca Illes Balears, Palma City Council, Llucmajor City Council and Ports de Balears, as well as collaborators such as Iberostar, Transmed and Ok Mobility.

The winners of the 51st edition of the Trofeo Princesa Sofía were: