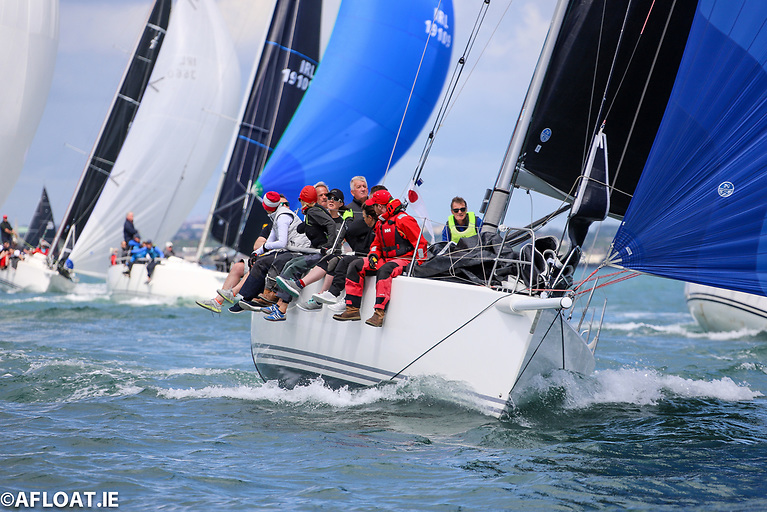 The finale of the 2022 seafront regatta season at Dun Laoghaire Harbor was presented on Saturday by the Royal St. George Yacht Club with its biennial Frank Keane BMW Regatta.

Around 150 boats across 30 separate racing divisions took part in the two-race program, although the IRC cruising program was interrupted by a lack of wind in the afternoon.

The Frank Keane BMW George Regatta closed the 2022 regattas at Dun Laoghaire, which started on June 12 with the DMYC Regatta and was followed a week later by the Davy NYC Regatta.

Some of the sponsor’s range of cars are displayed outside the Royal St. George Yacht Club on regatta day Photo: Afloat

And bathed in July sunshine – and shunning some of the heavy showers that have hit other parts of Dublin – the country’s biggest yacht club did not disappoint afloat or ashore.

A packed shore schedule made for a great day of fabulous food, family fun and the excitement of racing on the water.

Among the racing divisions in Dublin Bay, the typical fleet size was around seven boats, but there were exceptions, the IRC One Cruisers having 14 and the Flying Fifteen One Designs having 11.

Light westerly winds with lots of out-of-land travel were forecast to present plenty of opportunity on the race courses in the northwest and north bay areas.

The first race for the cruiser divisions lasted two and a half hours, and with it came a lot of change in the standings, especially as the wind became very light as it approached the top buoy.

Well-positioned marks gave the boats strong, tight legs with plenty of gusts under the darker clouds.

Third was the winner of the National Yacht Club regatta a fortnight ago, Pete Smyth’s Sunfast 3600, Searcher.

A large fleet of ten J109s raced as part of a 14-boat IRC One division Photo: Afloat

Second in IRC One – Tony Fox’s A35 Gringo from the National Yacht Club Photo: Afloat

Third, among the ten boats, the Dick Lovegrove of the Royal St. George sailed on the Sigma 33 Rupert.

All seven Beneteau 211s were won by Peter Carroll’s Yikes ahead of Royal Irish’ Pat Shannon at Beeswing. The third was a former national champion, James Conboy Fischer, in Billy Whizz.

Michael Blaney’s After You… of the host club led the nine Beneteau 31.7 boats. The second was Michael Bryson’s Bluefin Two of the National Yacht Club. Eoin O’Driscoll’s Kernach finished third.

Ken Dumpleton’s Flying Fifteen Rodriquez of the National Yacht Club took victory with a score of 2.1 in the fleet of 11 boats. In second place were Adrian Cooper’s Rockafellas with a 1.5 and third was Niall Coleman with a 4.3.

Two wins from two races made Michael Cutliffe, sailing Ruffles, the winner of a fleet of seven Ruffian 23 boats beating Brendan Duffy at Carmen. The third was the national champion boat Bandit, entered by Brian Cullen.

The IDRA 14 dinghies took the first three places in the fleet of six PY dinghies. Pierre Long’s Dart had two wins from Brian Murphy at Diane. Third was John Fitzgerald sailing on Doody.