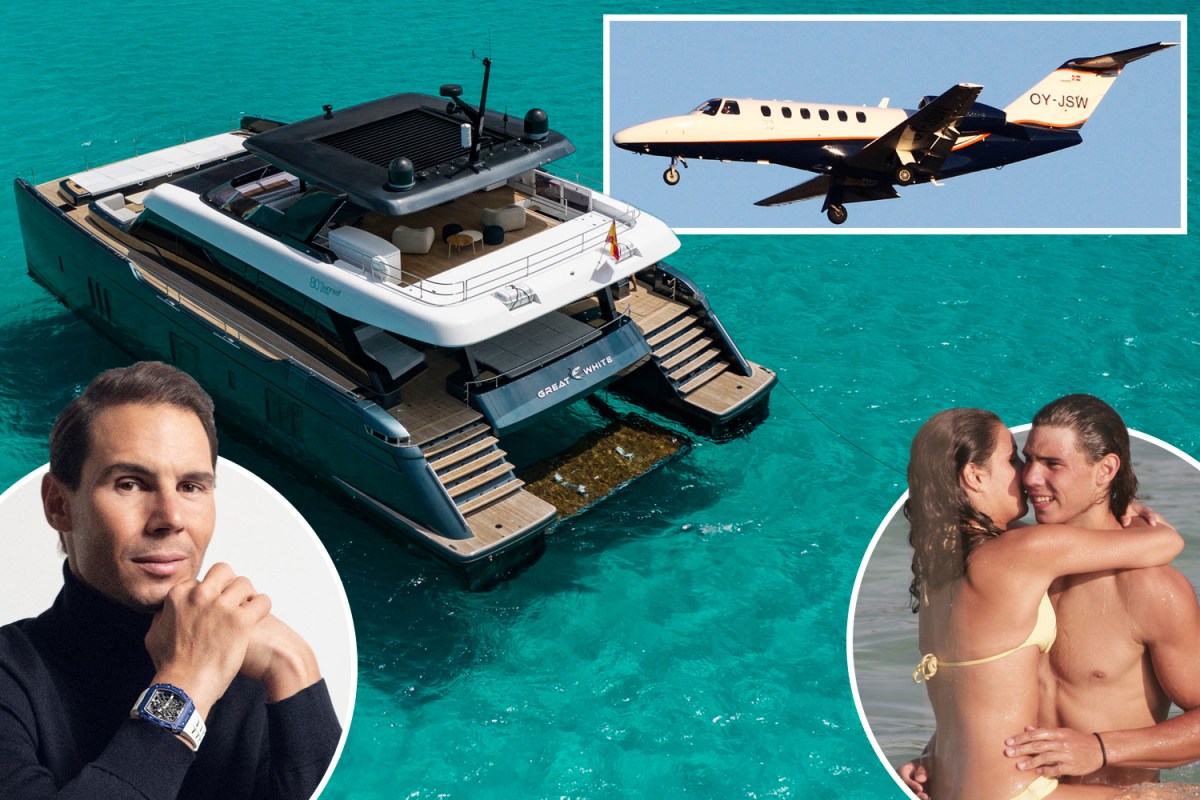 Rafael Nadal lives in a £3million Mallorca mansion, flies to tournaments in a £5million private jet and owns a £4.5million super yacht

RAFAEL NADAL is on the precipice of tennis history.

The Spanish legend, 35, can claim a record 21st Grand Slam title if he beats Daniil Medvedev in the Australian Open final on Sunday.

But off the pitch, Nadal lives a life of luxury generated by the wads of cash he earned from being an ace.

Rafael has earned £150million during his illustrious career.

He lives in a beautiful Mallorcan mansion by the sea, which he paid around £3million for in 2013.

The Real Madrid super fan has splashed the cash on a private jet – a Cessna Citation CJ2+ which flies him to tournaments around the world which cost £5million.

Nadal can also travel by sea in his stunning £4.5million 80 Sunreef Power catamaran, a super yacht he has custom-built.

He had insurance worker Maria Francisca Perello by his side throughout his success, with the couple finally marrying in 2019 after 14 years together.

A house with a view

Although Nadal likes to keep it private, like many professional athletes, he gave us a glimpse of his incredible home in the Balearic Islands during lockdown in 2020.

Found in Porto Cristo, Manacor, he paid £3million for the stunning beach property which spans just over 1,000 square metres.

It has been reported that Nadal spent seven years renovating the mansion and demolishing some of the buildings before it became a dream place to live.

The design, from what we’ve seen on Instagram, is minimalist with all the essentials Nadal needs.

It has a fully equipped gym to stay in top physical shape.

In his free time, he can enjoy the view of the Mediterranean Sea and the idyllic coves from his window.

It’s amazing to think that in 2010 Nadal tried to catch an economy flight for the Match for Africa until his rival Roger Federer took him away in his private jet.

Not wanting to get stuck again, the 13-time French Open winner decided to buy his own plane – a £5m Cessna Citation CJ2+.

The Cessna Citation CJ2+ can accommodate eight passengers in luxury.

Not forgetting what Federer did for him, Nadal flew Viktor Troicki to London in his jet after beating him in the Mercedes Cup final the day before.

Troicki then thanked Nadal for letting him fly with him and shared a snap with the former world number 1 and a pilot on Twitter.

“Thanks to the great champion @RafaelNadal for taking us to London!” he said.

By land and by sea

In 2019, Nadal traded this yacht for another. He sold his 76ft Italian-built MCY 76 motor yacht which he named Beethoven for £2million.

Then he invested that money in buying an amazing custom 80 Sunreef Power Catamaran for £4.5million.

Designed for long cruises and without skimping on total comfort, the 80 Sunreef Power is powered by two 1,200 hp engines.

It features a personal jet-ski garage and a 39-foot beam with a superyacht-style flybridge that offers an expansive living area big enough to house a hot tub, bar, and the waterfall-fed pool. .

The main deck can be configured in different ways, depending on your catering needs with different seats, an open kitchen and a bar.

The master suite, which is also on the main deck, offers sea views, as well as natural light from the skylight above.

It has an adjoining bathroom with shower, a large closet and a desk.

There are four guest cabins and two crew cabins, accommodating up to 12 guests at the same time.

Although he spends most of his time traveling the world, the one constant in his life is 33-year-old Maria.

Better known as Xisca Perello, she has never been one to monopolize the limelight or a celebrity lifestyle, although Nadal himself enjoyed hanging out with Spain’s World Cup stars in 2010 with the trophy.

“It’s not a world I want to be a part of, nor do I think Rafa would have chosen to be with a woman who was looking for that in life,” she once said.

They met in the early 2000s and were good friends before they started dating in 2005.

They tied the knot in 2019 in a star-studded ceremony in front of around 350 guests at La Fortaleza Castle in Mallorca.

But you will never see her on the circuit cheering on Rafael.

“He needs his space when he’s competing, and just the thought of me hanging around and waiting for his needs all day tires me out,” she told the Telegraph in 2011.

“It would suffocate me. And then he would have to worry about me… No. If I followed him everywhere, I think we might not get along.”

Maybe at the Australian Open on Sunday she will make an exception.

Release date and confirmation in 2022