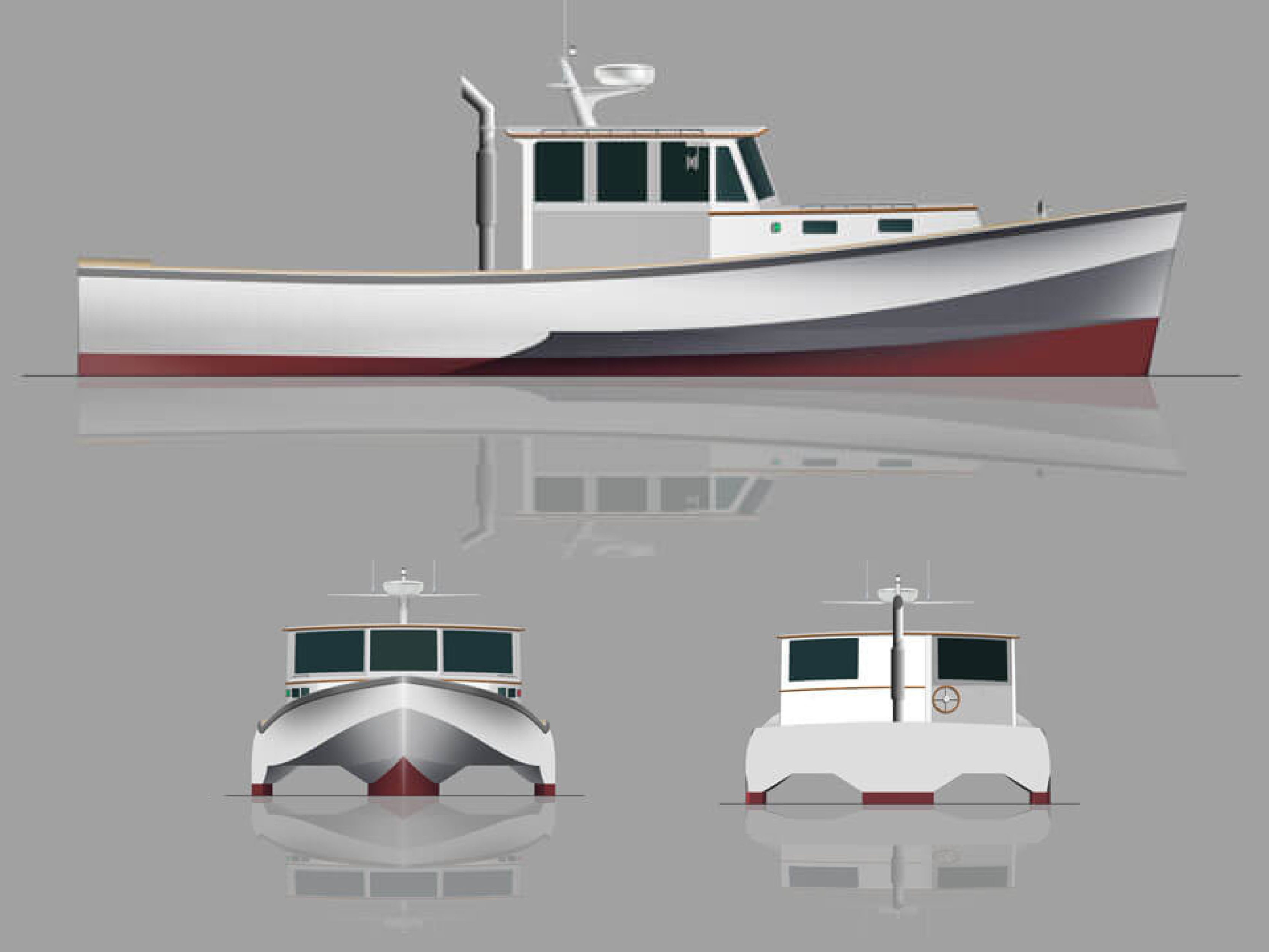 With fishing boats like New England lobster and Bristol Bay salmon getting wider and more expensive fuel, some boat designers think it’s just a matter of time before fishermen adopted multihull vessels. While the ferry and wind farm industries have benefited from the speed, stability and fuel efficiency of catamarans for years, multihulls have been a tough sell to commercial fishermen.

“You know what it’s like with anglers,” says Walter Schurtenberger, boat designer in Marathon, Florida. “They stick to what they know.”

Schurtenberger has designed a 65-foot catamaran for crawfish fishing, but no one has built it yet.

“I had two brothers from the Keys who were very interested,” he says, but he believes they dissolved their partnership and neither could fund the project on their own.

“It’s 24 feet wide and has an open stern,” says Schurtenberger. “That way they can back it up to the dock and load the traps onto pallets with a forklift.”

Schurtenberger estimates his design, using two 385hp engines, could cruise at over 20 knots. “The fuel savings with a catamaran would be around 50% with a light boat,” he says. ” It’s empty. Of course, if you have 600 traps on board, you won’t get that.

Nevertheless, fuel savings are a key motivation for many maritime sectors to turn to multihull vessels. In Maine, the Maine Center for Coastal Fisheries (MCCF) has for a decade partnered with the Maine Maritime Academy and other organizations to develop a “green lobster boat”, a three-hull lobster boat that would be more efficient than the large and often overpowered lobster boats that dominate the lobster fisheries of New England and the Canadian Maritimes.

“The initial design is for a 38 footer,” says MCCF’s Tom Duym. “They’ve built a 22-foot version that they’re going to test.” According to Duym, Maine lobsters who examined the boat were skeptical of its stability.

“They are wondering how it will behave in cross seas or on the stern,” says Duym. “They think it won’t work out so well.”

Professor Doug Reed of Maine Maritime Academy modeled the design and extrapolated how the boat will behave at full size.

“The model has a 37.5 horsepower Nana engine, a marinized Kubota. If I can get 12 knots with the model, I’ll be very happy,” says Reed. “It will drop to 14-16 knots for the full size boat. A survey by MCCF found that this is the speed most lobsters really want to go.

Reed notes that the covid pandemic has taken its toll on the project, but he hopes to launch the 22ft model by the end of the summer. “I think it will generate more interest once it’s in the water,” he says.

So far, no catamaran have been reported built for commercial fishermen in the United States and Canada. But Northern Irish boatbuilder Gerry Smyth has designed the Maxus Cat, an 11.95m (39.2ft) long and 5.5m (18ft) wide catamaran trawler that is making headway. Since launching the first MaxusCat, the Dignity in 2019, Smyth has built a total of 13 catamarans, including a 46ft version, the Lily James launched in 2021. “They use them as trawlers, lobster boats, longliners, everything,” says Smith.

Working with naval architect Ian MacCleod, Smyth turned his initial idea into CAD drawings and then built a wooden plug. “We took the molds out of that,” he says.

“I don’t know how much more efficient they are,” he says of his catamarans. “But it’s an amazing work platform, and there’s the safety of both engines.”

Schurtenberger agrees on the issue of stability.

“The catamaran is incredibly stable,” he says. Against the skepticism of Maine lobsters, Schurtenberger reckons his catamaran would barely notice a cross sea. “Of course, that would lift one hull a bit, then the other,” he says. “But I don’t see a problem. If you head out to sea you might feel the waves between the hulls, but it would have to be substantial before it made a difference.

Smyth reports that he recently visited the Canadian Maritimes, where several shipyards have expressed interest in building the Maxus Cat. It is possible that the multihull will make an appearance in North America in the not too distant future.