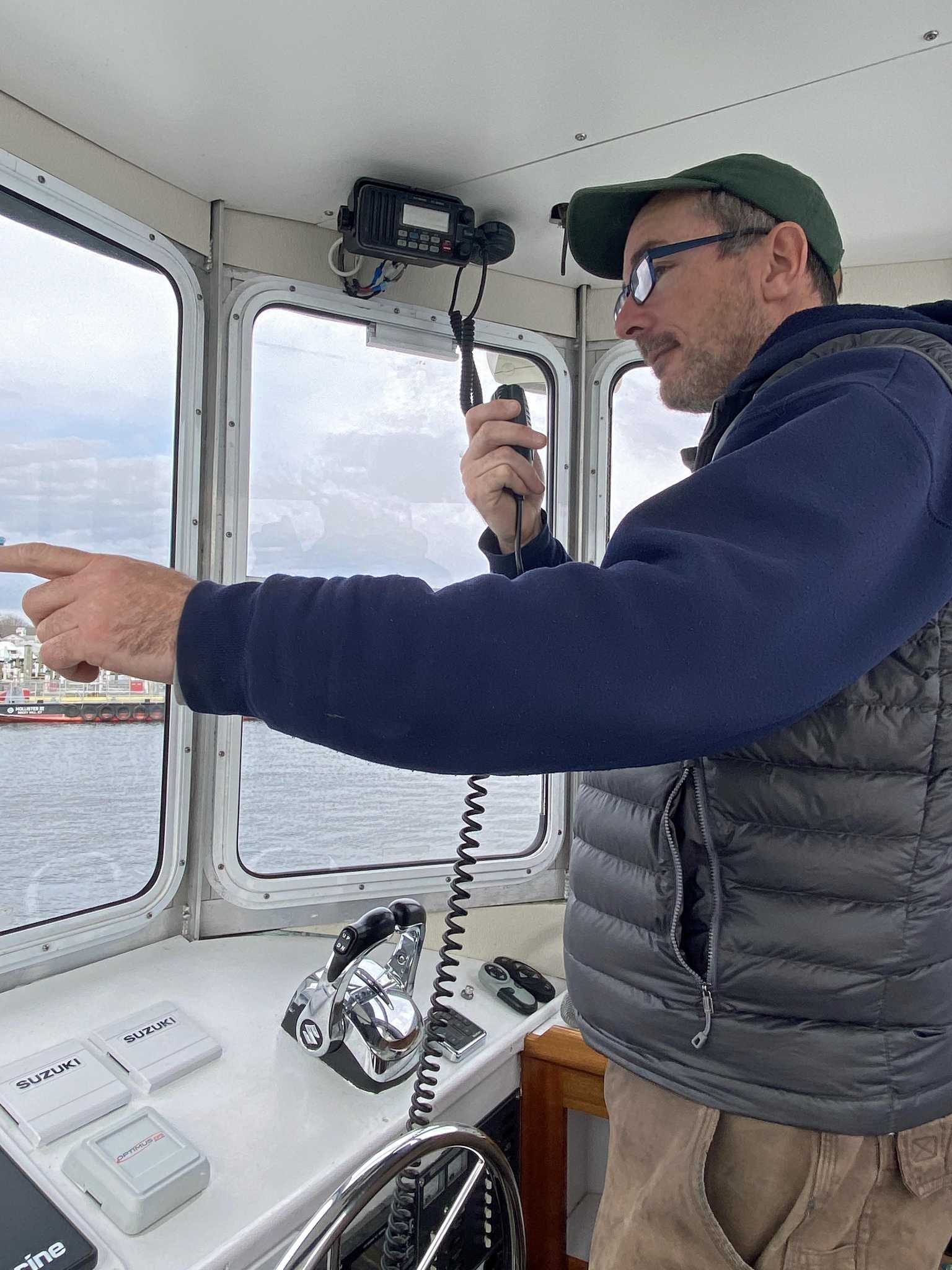 How about a warm-weather river cruise on the Connecticut River, where the RiverQuest — famous for its winter eagle-watching tours — is now permanently moored.

The Connecticut River Museum is gearing up for cruise season – with two boats now, instead of one.

Many know that the museum is home to the Onrust, the replica of Dutch explorer Adrian Block’s 1614 wooden sailing ship, which sailed the Connecticut River in the 1600s while Block charted the great waterway.

The RiverQuest, a sightseeing boat that can comfortably accommodate 50 passengers, will sail from February to October from the museum dock. For 20 years he called Essex home for the winter season, from where he set out on his osprey-eagle cruises. Now the museum is his home for the whole season.

The RiverQuest was purchased from Mark and Mindy Yuknat, who are downsizing from a smaller boat in Haddam to run eco-tours, clean up rivers and eradicate invasive aquatic plants, according to Cathy Malin, longtime crew member and naturalist. The Yuknats sold the boat to Fresh River LLC in late January, while the museum operates it.

Malin works at the museum, overseeing programs for the River Quest, where she was part of the crew for a decade.

“Actually, I came with the boat,” joked Malin, who had worked as a program coordinator for 17 years for the boat and spent much of the time on board, providing narration for the tours.

Now the odd-looking contraption will also be ready for summer fun.

The 64-foot River Quest is a stable, double-hulled tour boat that looks more like a tugboat with its wheelhouse seemingly laying on top, Malin noted.

“It’s a unique boat – you can’t guess what year it is,” Malin said, “because there’s nothing else like it. The wheelhouse now looks like a tug .

When people first see the wide boat, their reaction is surprise, she said.

“I think the initial reaction is ‘hmmm’ when they look at the boat and then they get on and relax.”

Kicking off the season will be a Cinco de Mayo cruise hosted by Ani’s Kitchen on May 5, followed by a Mother’s Day cruise and a Father’s Day outing.

The latest additions to the program are two-hour sunset cruises from June to August.

Passengers can bring “their favorite drink” and a picnic lunch on board and toast to the setting sun during the journey on this unspoilt stretch of the river, unseen by many who have not traveled its waters.

And it’s a great way to beat the heat on a sweltering summer day, Malin added.

“There’s nothing better on a hot summer day than getting out on the cool river and enjoying it,” she said. “Relax and watch the beautiful river go by – there’s nothing more relaxing.”

For those who just want to relax while taking in the sights passing by and not taking an official tour, “it’s lightly narrated — very lightly,” Malin noted.

When newbies step off the boat, Malin said, “The most common thing I hear – ‘I didn’t know it was right here in my own backyard. I had no idea of ​​all this beauty, all this wildlife.

Sometimes passengers can see the museum’s sister ship, the Onrust, on the water, it sails full and under wind power.

“If you’re on this boat and you see this boat (pointing at the Onrust tied to the dock without its mast) under sail, it’s amazing,” said Jane Raunikar, marketing manager at the museum.

“It’s breathtaking, when that mast goes up it looks like it would have looked in 1614,” Raunikar said.

The RiverQuest is relatively quiet when powered up and has two gasoline engines, according to Malin.

“They don’t have huge exhaust issues,” she said of the engines. “They were chosen because they are quiet enough for outboard motors. It’s not a big diesel engine.

The RiverQuest, as well as the Onrust, offer private charters. Both are popular venues for wedding anniversaries, family reunions and private parties.

Aboard the Onrust, which is a very different experience than the RiverQuest, Raunikar said, “You can bring your friend and bring picnic-type food, you can hoist the sails and steer the boat.”

If you need more space for your party, “The RiverQuest is wonderful for buffet-style cocktails…we can set up fancy tables and cakes and just go out and cruise and enjoy the beauty of the Lower Connecticut River,” Malin said, noting that the boat has a big-screen TV, which passengers can show “slideshows of loved ones.”

Other amenities on the large sightseeing boat include dining tables and chairs.

“Some people get very elaborate — they’ll bring a tablecloth, wicker baskets, wine glasses… It’s whatever you want to do with it,” Malin described.

“On the Onrust we have lines and sails, it needs to be a bit more contained. You need to bring a cooler,” Raunikar said.

The Onrust has an outboard motor when the wind drops.

Raunikar noted: “He (the captain) will go sailing a bit and which is funny when there is no wind – if you think of 1614, that was used to explore…”

“So these guys would go a bit and if the wind stopped they would have to drop anchor. It was a long journey,” Raunikar said of early explorers.

“It’s exactly what it would have felt like in 1614,” enthused Raunikar.

When it’s calm, the river is a sight to behold, Malin said.

“When it’s calm like this…the river gets flat, flat, flat. So you get all the highlights. It’s not often that there’s absolutely no wind, but when it does, it’s absolutely beautiful,” Malin said.

Glimpse of the past

On the Onrust, passengers can imagine what it was like for Adrian Block, Raunikar said.

“And now when they compare the maps of what he drew in 1614 and what you can see on GPS right now, they’re almost the same,” she said.

Navigating the river was a challenge at the time, she noted, as the channel changes with the current, bringing silt with it.

Today the blue-green water is very slightly tinged with what looks like mud.

It’s the spring thaw, Raunikar said, when “the silt is really pulled out of a glacial lake. It’s a big ‘lake bed’ at the head of the river.

“Every time you have all this current, it stirs up all this sand and it comes to the mouth of the river and deposits it,” she said.

The Connecticut River, she added, is “one of the largest rivers on the east coast that has no major port…it is 410 miles long and has no port.

But during the War of 1812, the changing channel and shifting sandbars were a hindrance to the British at one point.

That is, until a man from Essex, nicknamed “Traitor Jack”, decides to lend a hand to the invaders.

“He took his boat to the mouth of the river and met the English and said, ‘I’m going to show you how to come up the river…you have to know what you’re doing to come up here,'” Raunikar said. , adding that it led to the infamous Burning of Ships, where the English burned 27 ships.

But today, with a gentle April breeze chopping the water, it’s hard to imagine burning ships on the Essex seafront.

“We live in one of the most beautiful places ever,” Raunikar said.

For a complete list of events or to book your cruise aboard RiverQuest, visit www.ctrivermuseum.org or call 860-767-8269, ext. 110. The Connecticut River Museum is located on the waterfront at the foot of the Main in Essex at 67 Main St. and is open Tuesday through Sunday from 10 a.m. to 5 p.m.