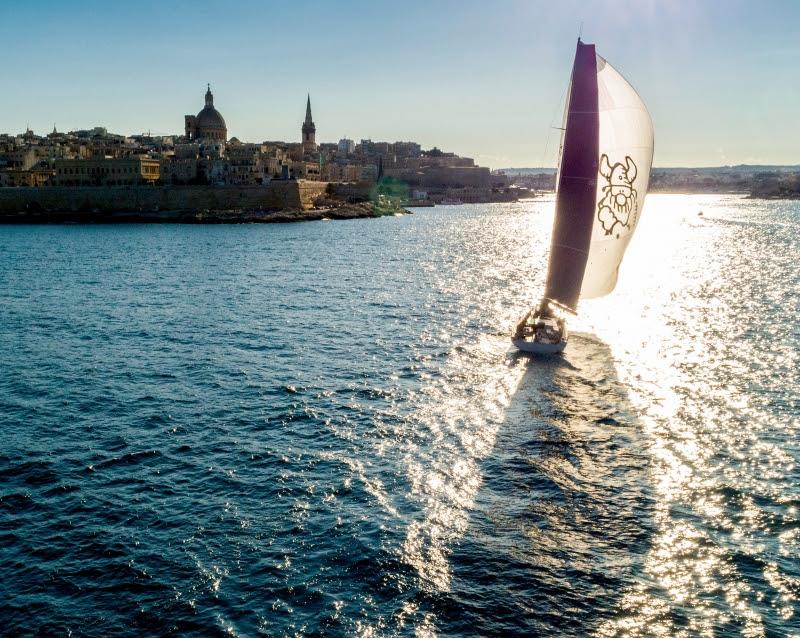 With 114 boats scheduled to cross the start line of the 42nd Rolex Middle Sea Race, tomorrow Saturday 23 October, lovers of offshore regattas will be in for a treat.

The Royal Malta Yacht Club has once again attracted a diverse and spectacular international fleet for its flagship event. The call for applications was launched earlier this year, amid a global pandemic, lockdowns and travel restrictions. No one expected the sailing world to respond so positively. And, if the weather gurus are to be believed, we could really be on the cusp of something special, with word from the dock that a new racing record is on the cards.

The size of the fleet ranges from 140 feet (42.56 meters) to some ridiculously small 30 feet (9 meters and over). Skorpios, the line of monohulls that honors the winner of the 2021 Rolex Fastnet Race and races under the direction of 2008 Tornado Olympic gold medalist Fernando Echavarri, is the Goliath on the run. The Davids are the Sunfast 3300 Munjek RS (CRO), the J / 99 Calypso (MLT) and Space Jockey (RUS) and the Hanse 311 Catina 4 (ITA). In between, a trio of 70-foot (21 m) trimarans – Maserati Multi70 (ITA), Mana (ITA) and Argo (USA) – and a host of other monohull yachts represent some 25 countries; an impressive feat for this much revered race which delighted the organizers.

“It seems interesting because there is a low pressure system developing over North Africa and which will move on the racetrack,” he explained. â€œWe should see some really strong winds which is unusual for this race (in recent years). The forecast looks good to us. the question is whether there is anyone in front. “The skipper of Comanche is Mitch Booth, one of Echavarri’s contenders at the 2008 Games.

This assessment was endorsed by Chris Branning and Silvio Arrivabene, co-navigators of George David’s current Rambler (USA), the 88-foot (26.8m) Juan K flyer – five-time winner of the monohull line at the Rolex Middle Sea Race. For Arrivabene, for his ninth race, this is the fastest forecast he has seen, and he can’t wait to see how fast they can cross the Strait of Messina to open the rest of the 606 nautical mile course.

In turn, Branning confirmed the importance of the system off North Africa: â€œThis will be the dominant weather feature, leaving us a good slope the whole way. There will be two tight transition zones at the Strait and west of Sicily. Lampedusa’s leg also looks quite fluid with some uncertainty as to where the lowest might be, and that’s probably the biggest variable left to be determined. ”

The big multihulls are also chomping at the bit. Maserati Multi70 skipper Giovanni Soldini has won online honors three times and holds the current multihull race record which, at just over 56.5 hours, is surprisingly slower than the monohull time. This year, however, everything could be about to change.

“We have known for a few days that this edition will be very windy,” he advised. “The first part of the race towards Messina for us will not have a strong wind, but from Stromboli to the finish it looks very, very good … 20 knots or more. It should be a good year for the record, and with the other multihulls it will be a very interesting race and it will be important to be ahead.

On Riccardo Pavoncelli’s Mana, beaten across the line by Maserati last year, but gained in corrected time, Jeff Mearing the captain of the boat confirmed the expectation of strong winds.

â€œThe boat is in good condition, all prepared and ready to go,â€ Mearing said. â€œIt will be a fruity race; the forecast changes every six hours as the low pressure moves. Right now we are trying to prepare everyone for the waves that are coming on the bridge. She is going to be a shot blaster for. this one.”

Mearing turns 40 on the day of departure and is delighted to do so on Mana with French offshore racing legend LoÃ¯ck Peyron.

Elsewhere in the fleet, the forecast is overshadowing, with a tough race ahead for smaller, slower boats. They have the prospect of facing winds of over 30 knots during the race. While maxi monohulls and multihulls could consider a passage of less than two days, those lower in the list will be at sea for up to six days, faced with the depression of yachts which, although seaworthy and ready, won’t eat the miles the same way.

German sailor Johannes Polgar from Hamburg, who ran by chance against Echavarri and Booth at the Beijing Olympics, is competing on Rafale, the German canting Elliot 52. The Rolex Middle Sea Race 2021 is his first experience of the most famous course off the Mediterranean, and makes it any race of this length.

“This is my very first offshore challenge, the legends around this race are strong and I am looking forward to a great adventure”, advised Polgar. Robin Zinkmann, Rafale sailor, agrees it will be a fast race, but not easy: â€œIt’s always difficult to model the winds in Messina, and we could stay there longer than expected. In addition, we will see a lot of wind. in the middle of the race, and I don’t know how far we can sail 100%. I’m assuming, at the moment, two and a half days.

“The start seems fairly light, with a drag race all the way to Sicily and Messina. It is crucial to arrive early before any closure. After the strait it is windy and fast.” Neville is excited to compete with a number of yachts that made it to the top ten of this summer’s Rolex Fastnet, including Sunrise (GBR), the eventual winner of the IRC ranking. He also chose another HH42 Artie (MLT), led by local legends Lee Satariano and Christian Ripard, a two-time winning combination in a previous iteration of Artie. “They are quite different from us,” Neville explained. â€œWe’re more powerful with double rudders, whereas I think they have a bit deeper keel. But their knowledge of the route could be important.

Many Maltese eyes will be on the Podesta siblings who race the First 45 Elusive 2 (MLT), winner of the last two editions of the Rolex Middle Sea Race. They will have their work cut out for them to achieve a hat-trick of this already stellar success story in such a large fleet. This year sees one of the biggest Maltese performances in recent editions, with 13 entries. Andrew Agius Delicata and Matthew Gabriele take on the inimitable doubles challenge with the Reflex 38 Vivace.

â€œThe Rolex Middle Sea Race is a very big challenge, just doing it with a full crew. This is the second time that we have done it in doubles, â€explained Delicata. â€œWe were fourth last time around, but we hope to be on the podium this year. We expect the race to last five to six days, so we’ll be focusing on saving energy on the first two. We may not be as fast as the crewed yachts. , but we’re going to prune as hard as possible. ”

Whether large, small, single or triple, the Rolex Middle Sea Race 2021 has all the hallmarks of a classic in the making. The combination of a great weather forecast, a great fleet and a great course is a tantalizing prospect.