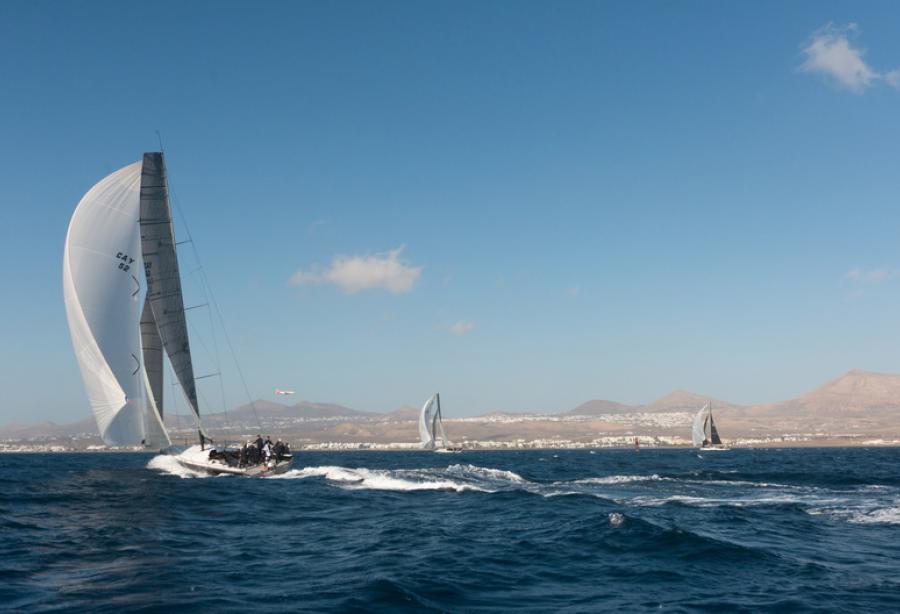 The RORC 2022 transatlantic race started on January 8 in glorious conditions outside Marina Lanzarote. After months of preparation and planning, the 3000nm race to Granada has started for 256 sailors from 27 different countries. The record fleet of 30 boats set off downwind, leaving Lanzarote behind. The RORC fleet will cross the Canary Islands before sailing into the open waters of the Atlantic. An intricate weather system promises a fascinating race to Camper & Nicholsons Port Louis Marina in Granada.

“15 to 20 knots of wind with a wave height of almost a meter and a half allowed for a spectacular downwind start,” commented Tim Thubron, RORC deputy race director. “The starts of the combined MOCRA and IRC classes were very competitive; it shows how fiery this fleet is. The RORC Race team will be monitoring their progress throughout the race 24 hours a day, 7 days a week, and as with all events at our club, we wish all of our competitors a safe and enjoyable race.

At over 30 knots, the powerful MOCRA class multihulls were the first. Jason Carroll’s MOD70 Argo (USA) won the pin-end with Giovanni Soldini’s Multi70 Maserati (ITA) crossing the leeward line. The Italian team were the first to jibe near the coast and at the turn mark in Puerto Calero. However, Peter Cunningham’s MOD70 PowerPlay (CAY) exploded ahead, reaching a speed of 33 knots. PowerPlay was the first to clear the passage between Lanzarote and Fuerteventura. Argo and Maserati jibed south of the rhumb line, but PowerPlay continued to move north. Within three hours of the start of the race, the trio had covered more than 70 miles.

On January 9, the leading multihulls slowed to less than 20 knots as they entered the transition zone created between the low to the northwest and the trade winds to the northeast. Peter Cunningham’s MOD70 PowerPlay (CAY) has been the dominant force so far and has taken a position to the west compared to Giovanni Soldini’s Multi70 Maserati (ITA) and Jason Carroll’s MOD70 Argo (USA). Tactically, PowerPlay is positioned between the competition and the finish. The race is on to cross the transition zone and jibe on the cool north-westerly breeze.

I love Poland and the five oceans

L4 Trifork got off to the best start in the big boat class, with Joern Larsen at the helm and Bouwe Bekking at the helm. L4 Trifork got downwind and got into the fresh air to hoist his huge spinnaker. The L4 Trifork was originally the VO70 Ericsson 4, but now has DSS foils and a longer bowsprit – the turbo would be an understatement. However, the 100 foot tilting keel Maxi Comanche, skippered by Mitch Booth also did well, overtaking L4 Trifork upwind in a show of power.

L4 Trifork jibed on his line and maybe even had a tow in his quarter wave. It was an aggressive start by both teams. After three hours of racing, Comanche leads by five miles. Behind the leaders on the water, HYPR (NED), led by Jens Lindner, took a northern position. The Polish National Foundation’s VO70 I Love Poland and Austrian Ocean Racing’s VO65 Sisi are further south.

The 100 foot Maxi Comanche (CAY) skippered by Mitch Booth gybed southwest shortly after dawn on the second day and stayed on the same jibe all day. Over a wide range, Comanche has been unstoppable, reaching over 20 knots of boat speed hour after hour. If Comanche continues at this pace, the race record will be broken by more than three days. The Volvo 70 L4 Trifork (DEN) is the most northerly boat in the RORC fleet and rightly so, the majority of the crew are from Scandinavia.

The super-fight between fifty feet from the sea starts off with a bang. Max Klink’s Botin 52 Caro (CH) nailed the end of the line as if the team were starting an inshore race. David Collins Botin 52 Tala (GBR) wasn’t shy either. The Botin 56 Black Pearl (GER), helmed by Stefan Jentsch, was also in the game. Three hours after the start of the race, the trio were racing three abreast, at nearly 20 knots of boat speed.

Max Klink’s Botin 52 Caro (CH) is still at the top of the class on January 9, but narrowly. Botin 56 Black Pearl (GER), helmed by Stefan Jentsch, and Botin 52 Tala (GBR) by David Collins have all gybed west and continue their duel. In reality, the three boats are in contention for the class and the head of the general classification, after correction of the IRC time.

Andrew Hall’s Lombard 46 Pata Negra (GBR) slipped out of the class at the start to lead on the water. Ross Applebey’s Oyster 48 Scarlet Oyster (GBR) got off to an excellent tactical start, sailing along the coast of Lanzarote to record a compensated speed of over 10 knots. Christopher Daniel’s J / 122 Juno (GBR) crosses the Atlantic for the first time.

The departure from Tenerife to the port went well for the JPK 1010 Jangada (GBR) by Richard Palmer, the Milon 41 L’Ange De Milon (FRA) by Jacques Pelletier and the Oyster 48 Scarlet Oyster (GBR). by Ross Applebey. However, Andrew Hall’s Lombard 46 Pata Negra (GBR), which passed south of Tenerife, is now passing downwind of the island and starting to increase speed due to the right pressure.

Christopher Daniel on his J / 121 Juno (GBR) reported as the team passed south of Tenerife: “Juno had a good first 30 hours with the North Atlantic giving us an unforgettable welcome reception. With winds ranging from 30 knots to almost nothing, we have already used all the sails in the trunk! Before the departure we made the decision to get lost towards the rhumb line and have just rolled the dice to navigate between Tenerife and La Palma. It’s not an easy call, and we’ll never know if it was correct when we all re-converge westward from the wind shadow of La Palma.

Two of the boats participating in the RORC Transatlantic Race reported that they were heading for the coast. Swan 58 OM II and the classic Faiaoahe. The OM II has withdrawn from the race and will sail to Antigua. Faiaoahe reported that he had temporarily suspended the race but intended to resume racing. All are safe and sound on board the two boats.

The boats going to the island of St Martin