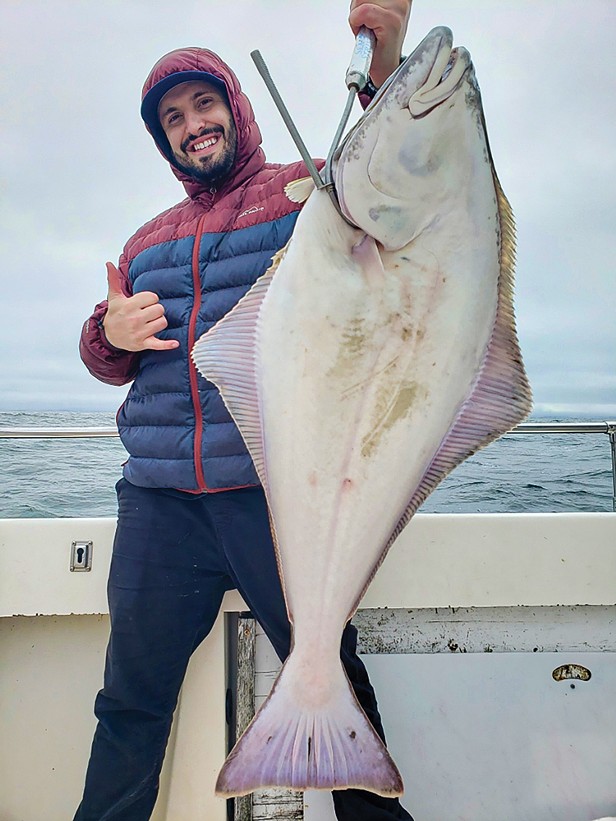 When the ocean was fished, the Pacific halibut ate bait at a pretty good clip of Eureka. Most charters and sport boats that still fish reach their limit of one fish each. The biggest damage was the weather. Heavy swells have been the norm over the past few weeks, limiting the fleet to just a day here and there on the water. When the stars align, the fishing has been very good. “There are a lot of fish out there,” said Tim Klassen of Reel Steel Sport Fishing. “Most of the action took place in the same general area, between lines 49 and 54 in 200 to 300 feet of water.” According to Klassen, the majority of fish weigh between 10 and 20 pounds, but a few larger fish have appeared. The best baits were herring and salmon and tuna bellies. Choppy ocean conditions are expected at least until the end of the week. The good news is that without fishing, the quota will last longer. The halibut fishery will continue until November 15 or until the quota is reached, whichever comes first. As of September 12, the California Dept. of Fish and Wildlife had estimated that 26,118 net pounds of Pacific halibut had been harvested under the 39,260-pound quota. For the latest information on catch projections, visit www.wildlife.ca.gov/Conservation/Marine/Pacific-Halibut#31670772-in-season-tracking.

Northerly winds will continue throughout the week before strengthening and spreading northward late Thursday and into the weekend. On Tuesday, the 10 nautical mile forecast for Friday calls for northerly winds of 5 to 15 knots with northerly swells of 10 feet at eight seconds. Saturday announces northerly winds of 5 to 15 knots and northwesterly swells of 7 feet at 11 seconds. Winds will be northerly 5 to 10 knots and northerly swells 4 feet 6 seconds and northwest 7 feet 14 seconds on Sunday. These conditions can and will change by the weekend. For up-to-date weather forecasts, visit www.weather.gov/eureka/ or www.windy.com. To monitor the latest Humboldt bar conditions, visit www.wrh.noaa.gov/eka/swan. You can also call the National Weather Service at 443-7062 or the Woodley Island office at 443-6484.

The California Fish and Game Commission adopted new regulations for recreational crab fishing in 2021. The revised regulations include the following new requirements when fishing with crab pots:

All crab traps should be serviced at least every nine days

A limit of 10 traps per person

Also note that the CDFW director can now implement a season delay or early season closure due to the risk of entanglement of marine life. Notices of delay or closure will be posted on the CDFW’s Whale Safe Fisheries web page at least five days prior to any delay or closure. The Dungeness season is scheduled to reopen on November 6. Crabbers can also sign up to receive important information about the season and updates on the web page. The new regulations are in effect as of November 1. Recreational Crab Trap Validation can now be purchased at www.wildlife.ca.gov/Licensing/Fishing as well as other approved licensing agents. For more information on the regulatory changes, visit www.nrm.dfg.ca.gov/FileHandler.ashx?DocumentID=195067&inline.

Harsh ocean conditions have kept the boats docked since Monday and it looks more the same all week. The Pacific Halibut bite remains strong between lines 49 and 54, weather permitting. According to Klassen, rockfish action near Cape Mendocino was more difficult than usual over the weekend. “There are still a lot of black people but not a lot of other species,” he said. “The bite from the lingcod was not that great either. The ocean conditions could have kept them from getting stung.”

The redfish bite has been excellent all week, according to Jake Mitchell of Sea Hawk Sport Fishing. “We caught up with Rodgers’ break in marginal conditions and did really well for a few days,” he said. “The weather finally calmed down enough that we could make it to Gorda on Sunday, and we had redfish and ling limits as well as four Pacific halibut. We fished for salmon for about eight hours in total this week and landed seven fish over 27 pounds just ahead inside the whistle. “

According to Britt Carson of Anglund Marine of Crescent City, tuna were caught last weekend 40 miles from the port. “Since Sunday the ocean has been really rough,” he said. “When the boats can get out, the rockfish and lingcod bite is still great. The California halibut are pretty much done.”

Lingcod and redfish action has been good on calm days, which have been scarce in recent weeks, reports Andy Martin of Brookings Fishing Charters. “Friday gave limits for most boats, while the weather returned over the weekend. The Chetco River bar was closed on Monday. Heavy swells will limit the action for much of this week. Pacific halibut season remains open. “

Rivers on the north coast that are regulated by low-flow closures, including Eel, Mad, Mattole, Redwood Creek, Smith and Van Duzen, will begin restricting fishing from October 1 to January 31, with the exception of the river. Mad, which went into effect on September 7. 1. The Department of Fisheries and Game will make the information available to the public by an updated recorded telephone message, if necessary, no later than 1:00 p.m. every Monday, Wednesday and Friday to find out whether a stream will be closed to fishing. Rivers can be open at any time. The hotline for low flow closures for the North Coast rivers is (707) 822-3164. NOTE: The South Fork Main Eel at Cape Horn Dam and Mattole River will be closed until January 1, 2022.

The main branch of the Eel river from the paved junction of Fulmor Road with the River Eel to the South Fork Eel River. Minimum flow: 350 cfs at the gauging station near Scotia.

Van Duzen River: The main stem of the Van Duzen River from its junction with the Eel River to the end of Golden Gate Drive near Bridgeville (approximately 4000 feet upstream of the Little Golden Gate Bridge. Minimum flow: 150 cfs at the gauging station near Grizzly Creek Redwoods State Park.

Sequoia Creek: The main stem of Redwood Creek from the mouth to its confluence with Bond Creek. Minimum flow: 300 cfs at the gauging station near the US Highway 101 bridge.

Salmon fishing slowed down slightly at the end of last week as the mouth was reportedly sanded. Fishing resumed Sunday, with jacks and a few adults caught between Starwein and Blue Creek. With over an inch of rain on Monday and flows jumping up to 400 cfs, there should be plenty of fish moving through the mouth into the lower river.

“Salmon fishing has heated up at the mouth of the Chetco, where a dozen kings are caught daily by trollers along the jetties,” Martin said. “More hatchery fish appeared last week, a sign that the return is accelerating. Low flow regulations are in place upstream, as kings begin to exit the estuary and into the tidal waters. The rains at the start of the week have increased flows, but not enough to fish from a boat drifting upstream. “