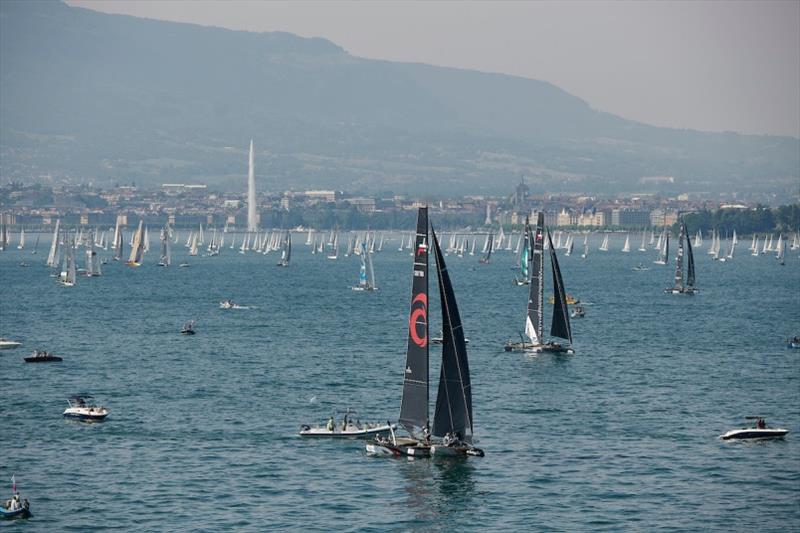 As tradition dictates, some 450 boats and several thousand sailors stormed around Lake Geneva, leaving to the sound of cannon fire on Saturday at 10 a.m.

For multihulls, the 82nd edition of the world’s largest closed-basin regatta can be classified in the early summer classic Bol d’Or series, with light winds, thermal breezes and lots of twists and turns!

Nils Frei: “After a good start, we were fighting for the lead in front of the peloton, before being passed by two D35s and one M2. Being in front is good. But in light, soft wind conditions, it shows, when you stop, those who chase you in areas with no wind, then come back into contact, being able to bypass that “truce” you found yourself in.

“And then at one point comes the finish line, which yesterday was after 12:50 in the TF35 race. It is the last transition that we must not fail to nail. A little wind came in, we took off this time shortly after a few boats and we finished 4th 34 seconds behind Ylliam – Comptoir Immobilier, whom we congratulate, as did Zen Too and SailFever, who completed the podium. ”

Miles ahead that melt like snow in the sun:

We counted six “new starts”, where M2, D35 and TF35 were almost on a tied starting line. Each time, the boats, once separated, returned to contact, or even took the lead. At 2 p.m., Alinghi was up to 11km ahead of Realteam. A few hours later, the two boats were upgraded!

Nils Frei: “As soon as the wind picks up a little, the TFs get on their foils, the gaps fill up or widen quickly, leaving little chance for the M2 and D35, kings of light winds.

“The good news for this Bol is for the TF35 class, for whom it was a baptism of fire on the Bol d’Or. As we feared in this type of conditions, the M2 and D35 were largely the protagonists at the head of the A 13 hours for the leaders and with around 140 km covered, the average speed was around 6-7 knots. It is slow for the multihulls, whereas the record for the event is 5:01:51 “. Seven first places is a success for this new class with its complex but well-established specifications.

“At our level, we will continue to develop techniques in light conditions and we will be delighted to run the Bol in a stronger wind!

Nils Frei: “Sport is really different from a grand prix type regatta and when you start a long race like the Bol, you have to accept this element of randomness, which is becoming more and more present. It is not easy to assimilate and there is no magic formula in light winds. You have to be in the right place at the right time and, above all, be on the right boat. We have the feeling of having sailed well. If we had to do the race again, that wouldn’t change much. We had good speed and started well after each ‘new start’, but in the end, as fast as it was unpredictable, we missed an opportunity. ”

When the wind finally picked up, six TF35s were sprinting at 25 knots in pitch darkness as they approached Geneva, escorted by dozens of motorboats with all lights on.

The first four TF35s arrived within 34 seconds, with the next two crossing the finish line at Société Nautique de Genève a minute later.

In the provisional general classification of the TF35 Trophy, Realteam takes the lead, one point ahead of Alinghi. Spindrift is 3rd before the summer break and the two finals which will take place in Scarlino. It should be noted that the rules of the classification of the season allow the withdrawal of the worst score: Realteam played its ‘joker’ by finishing 7th in the event which combined the two long races (Geneva-Rolle-Geneva and Bol d’Or) . There is no doubt that the battle will be intense to win the very first TF35 Trophy awarded in Italy in September.

Until then, the team will continue their second annual regatta circuit and will soon fly to Lagos, southern Portugal, ahead of the first stage of the GC32 Racing Tour from July 1-4.

Extracts from the ranking of the 82nd Bol d’Or Mirabaud:

See the ranking including all boats.

Extracts from the provisional general classification of the TF35 Trophy after five events (NB: out of four validated events, the worst score is withdrawn / The results of the two long races are added together to form only one event):