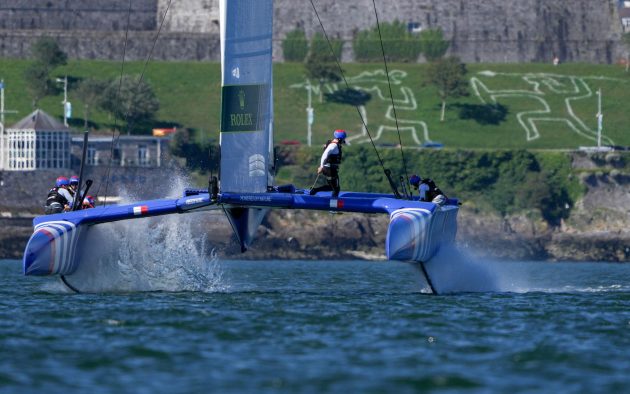 SailGP: the teams prepared for the British stage

The third round of the 2021 SailGP season will see the teams go head to head in Plymouth. The championship promises to be tight with a lot to gain

The British Sailing Grand Prix is â€‹â€‹here, as SailGP’s eight national teams face off in Plymouth this weekend in hopes of winning the third event of the series’ second season.

Although they have not won either of the two events so far, the Spanish team are currently leading the championship, and Australian coxswain Phil Robertson would like to prove the Spanish title by being crowned Grand Prix champion of Great Britain sailing.

At the other end of the table are Denmark and the United States, but only five points separate last place from first and a strong performance at Plymouth could turn a poor start to the season into a promising one.

We’ve had a lot of drama in Bermuda and Italy this season already, and Plymouth promises the same.

Champions of the season opener in Bermuda, Great Britain had a more disappointing sixth place in Taranto last time under the guidance of interim driver Paul Goodison, who stepped in, in the absence of Sir Ben Ainslie.

Goodison remains the skipper of the British Home Sailing Grand Prix in Plymouth, and he hopes for a better performance in front of the home crowd.

Great Britain are still in second in the standings this season despite Italy’s poor performance, and a home win would allow the British side to further solidify their position among the league favorites.

Spain seeks to extend its lead over SailGP

Spain, although they have not won any events so far this campaign, are the only side ahead of the Brits in the league standings so far. Phil Robertson’s team lead the standings with fourth and third places in Bermuda and Italy respectively, and he has proven that consistency through events is the key to success in SailGP.

The Spaniards will be aiming for a victory in Plymouth, but another top-three placement wouldn’t be a bad thing – and it would prove the credentials of the Spanish league.

Could the United States end its bad luck?

It’s a rather unhappy start to life in SailGP for Jimmy Spithill, who took charge of the American team at the start of the season.

The USA helm saw his team finish last in their first event in Bermuda due to a collision with Japan that damaged both F50s so much that they were withdrawn the remainder of the event.

Once again, damage to the foiled F50 forced the United States to give up, and Spithill is now entering his third SailGP event in hopes of carrying one to the end.

Denmark in search of form

After the British Grand Prix in sailing, SailGP heads to Aarhus for the first Danish event of the championship.

There will be a lot of support for the home side in Aarhus, but Denmark hope to approach this event in better form than the team have been so far this season.

Helmsman Nicolai Sehested sees his team currently last in the championship of the season, having so far collected just 11 points.

It’s still too early in the season to write off the Danes, but Sehested and his teammates need to start climbing the ranks if they are to win the silverware.

Great Britain and New Zealand have called in interim pilots at the Italian Sailing Grand Prix, with Paul Goodison and Arnaud Psarofaghis in charge of the teams respectively in place of Ben Ainslie and Peter Burling. look to defend their 49er Rio 2016 gold medal.

Psarofaghis got the better of the two, winning Race 4 and finishing the weekend fourth in the standings, but neither really excelled as they experienced the F50 for the first time.

But now that they’ve gained the experience of a full event, Goodison and Psarofaghis are hoping to improve their performance in Plymouth to ensure the Brits and Kiwis stay close to the top of the season’s championship standings.

Captain’s Log: The whales and dolphins of summer | Outside