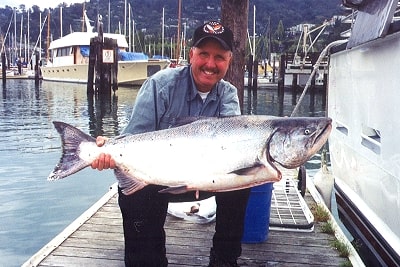 They say if you are lucky enough you can turn your passion into business. Captain Jim Robertson knows he’s one of the lucky ones. Over the past 50 years, the San Rafael resident has shared his lifelong love for fishing and boats through a career in charter fishing.

Growing up fishing in the bay, the San Francisco native was drawn to the waters off Sausalito, where he transported people on his boats – the Ginnie C, Ginnie C II and the Outer Limits, a catamaran. he built and one of the first in the Bay Area and named after his company.

A friendly and familiar face on the water, Robertson will last dock early next year and retire, passing the torch to Christian Cavanaugh, who started fishing with him as a child and worked for him for years.

Q What inspired you to start your business?

A During the last years of high school and college, I worked on boats on weekends and summers for a living, and decided to quit and study to get my license. In 1976, I purchased the Ginnie C from (late Henry and Virginia Carlson). When I started I was a young man, and they noticed me and asked me if I was interested in this business. I said I was. They reduced the price of the boat, took me under their wing, became like my second parents and taught me the trade.

A I am still quite capable of doing the job, but I will be 70 in January. I have had other people who offered me more for my boat and want to take it to another port but I was not interested. The way the Carlsons treated me and prepared me, I wanted to do this for a young man. When I heard that Christian was looking for a boat, I contacted him. It’s like paying up front for what happened to me.

A In this job, it takes a lot from your family, because every summer you work seven days a week. My wife said she wanted to travel.

Q What prompted you to focus on the charter aspect of the industry?

A This is where I started. My brother and I had a dinghy and this guy we were taking fishing was a sailor on a boat in Sausalito, and he was bringing me with him. I would go fishing and learn to be a deckhand. Commercial fishermen are gone sometimes three, four nights or even longer, and I wanted to be around my family and home in the evenings.

Q When did you learn to fish?

A When I was little, my neighbor would take me and my brother to fish. My brother and I saved our money – we had a paper route and other odd jobs – and bought a small skiff. We fished mainly for striped bass in the bay, and that’s where it developed. It was still in my blood. It is something that never goes away. It’s just that thrill.

Q What did you like about what you do?

A You see people doing something they love, which is worth it. The hardest part of our job is when the fish don’t bite and it really takes a lot of effort. But when they bite, you jump out of bed, you can’t wait to go. Seeing a kid catch a little fish and seeing a guy who has done it a few times catch this beautiful big fish and being so happy is so rewarding.

Q What did you learn from the Carlsons?

A They taught me to be more humble with people. Don’t think that you are the tallest. It was all about experience. Treat people the way you would like to be treated. I don’t want to make it impersonal. I want people to know they know Captain Jim.