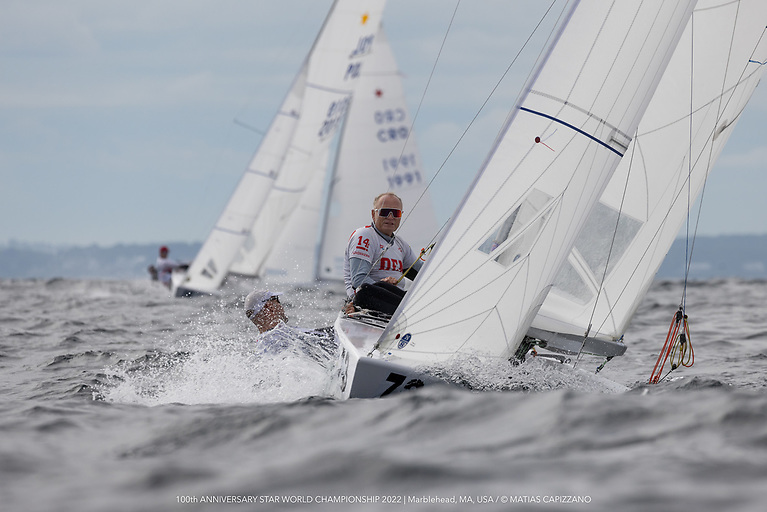 An impressive run of form gave victory in Race 2 to Jørgen Schönherr (DEN) and Markus Koy (GER) who controlled the Star Fleet of the World Championship from start to finish and finished the day in 4th position overall.

At the top of the list, the Italians Diego Negri/Sergio Lambertenghi, who now have two second places, are ahead of Paul Cayard (USA)/Frithjof Kleen (GER), followed by the Croatians Tonci Stipanovic/Tudor Bilic.

A postponed start, followed by a general recall, saw the start of the races at 2:09 p.m. The 6 knot breeze held steady with short chop, strong current, very tight racing and supreme performance throughout the 8nm run. A frustrating day though for the five teams who gave themselves a mountain of points to climb after adding a UFD penalty to their scorecards.

Anticipating that the wind would go to the left, Schönherr/Koy opted for the start from the port end. While the change did not materialize, their positioning and the speed of their boat kept them in the lead, with Negri/Lambertenghi hot on their heels throughout the race.

“We had a great day today,” smiled Schönherr of the duo’s ability to contain a fleet full of world champions. “We had a great start and then we had a tough fight with all the gold stars breathing down our necks. We managed to stay ahead, so we’re proud of that.

A track fact revealed by Schönherr is that today’s victory is only the second time he has won a race at a Star Worlds, the previous time being the last race at last year’s Worlds, where the pair finished 4th overall.

“From the start we were leading the race and we were able to finish it as well which was great,” added Koy. “The key to success was that we had very good upwind speed, as well as good downwind speed. We were never really under pressure in speed, so we could tactically navigate a bit ahead of the others and control them.

Negri/Lambertenghi were always present in attack, relying on every whiff of the final stage to hunt down the race leaders, as Schönherr acknowledged saying: “Diego is always fast. If we can keep in touch with him, we are super happy.

Negri has a battle on his hands to defend his Star Worlds 2021 title, with a fleet full of former world champions hoping to add another gold star to their trophy cabinet, as well as plenty of rivals keen to claim their first to this 100th anniversary event. In a bizarre twist to his title defense, Negri has been forced to punt on some borrowed sails as his own are stuck in Ireland, although so far the loaned set hasn’t been disappointing!

2009 All-Star World Champion George Szabo is one of many rivals excited about the event, “It’s the big wigs, it’s always so much fun.”

Reflecting on the change in approach when racing such a large fleet, Szabo commented: “You can’t come up in the middle so much, you have to stay on the edges and also with so many boats the water is more choppy. , so you sometimes have to set the sails a little fuller and a little looser to get out of the way. We have a pace of over two miles, it’s so much fun you can’t even find the mark for a long time. Every little change amplifies through the leverage you have on this massive racetrack. It’s epic.

After the race, the racetrack rivalries die down and the deep-rooted camaraderie ignites, with the usual Star Class spirit and socializing boosted by tonight’s party sponsored by Doyle Sails.