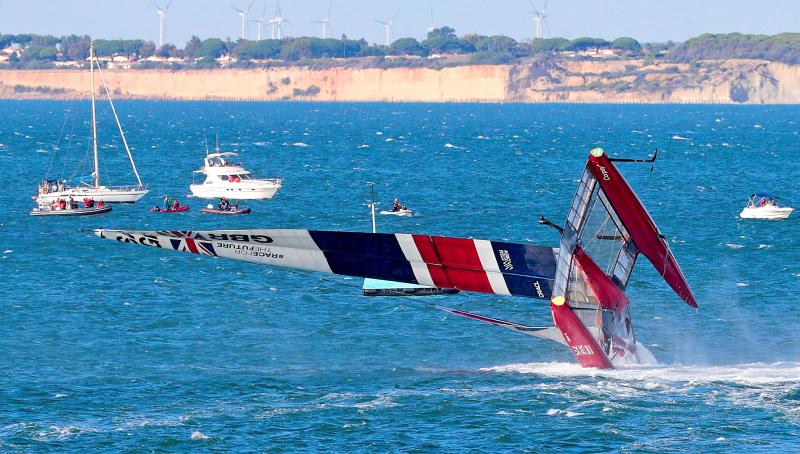 Tom Slingsby and the Australian team won the Spanish Sailing Grand Prix on Sunday by easily taking the race on the podium after Sir Ben Ainslie’s British team capsized just after the start, putting American skipper Jimmy Spithill out of the race.

The victory on a wild afternoon on the Bay of Cadiz saw the reigning champions return to the top of the season standings ahead of their home regatta in Sydney in mid-December.

The expected heavyweight confrontation in the podium race between three of the best skippers in the world never materialized. Slingsby, Ainslie and Spithill were teammates with Oracle Team USA in 2013 and helped put together one of the biggest sporting comebacks to successfully defend the America’s Cup.

Ainslie’s 15m (50ft) foiling catamaran nosedived shortly after the start, and Spithill had to turn so sharply to avoid a collision that his catamaran crashed from its foils, triggering the wing systems. emergency stop.

During the time it took for the systems to restart, Slingsby had earned his third victory in six races this season.

â€œWe are delighted with the day. It couldn’t have been better for us, â€said Slingsby, who for the second time this season has rebounded from a final place to win a regatta.

â€œRight off the line we realized that Ben had a better start, better acceleration, and we saw it all unfold right in front of us,â€ Slingsby said. â€œIt looked like they had had a big gust and that they got up a bit on the foils. I just saw them enter a huge pitch-pole just in front of us. The point was to avoid them, and then we didn’t really realize what happened to Team USA. We realized we had a big lead and we just had to make our way down the track. “

Spithill, two-time America’s Cup winner, was able to start again and finish the race to strengthen Team USA’s place in the standings.

The Australian team leads the eight-team fleet with 45 points, followed by the United States and Japan with 44 each and Great Britain with 40.

Following the Sydney Regatta, the season’s championship is to be decided in San Francisco from March 26-27 next year, when the top three teams go head to head for the million dollar, win-win championship. .

The Australians won the US $ 1 million prize in the inaugural 2019 season.

“It’s a nice feeling to finish the European stage ahead,” said Slingsby. â€œEveryone’s kidding, we’re the Ricky Bobby of the fleet. We are either the first or the last. I didn’t expect this to happen, but it’s true at the moment. We are either fit or out of shape. I am happy that we are in good shape in the final event and we are heading to Australia with the lead.

Comments will be moderated. Keep comments relevant to the article. Comments containing abusive and obscene language, personal attacks of any kind or promotion will be removed and the user banned. The final decision will be at the discretion of the Taipei Times.