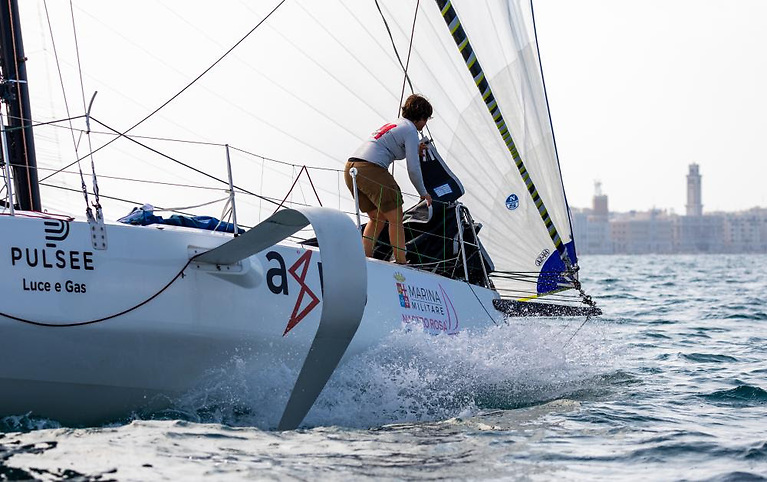 The ESP team quickly took the lead in Stage 2 of the 2021 Hempels two-way mixed offshore keelboat world championship in Italy. The fleet of 10 Figaro 3 keelboats left Bari at 08:00 this morning for a 300 mile stage across the Adriatic Sea to the finish line at Marina di Ravenna.

The event will end at the end of stage 3 in Venice on September 24, when the first winners of the two-person Offshore Mixed World Championship will step onto the podium in one of Italy’s most beautiful cities. .

Guillermo Altadill of Team ESP, sailing with Aina Bauzà, said he was relaxed on the start, predicting that the wind would stop before coming back stronger in the afternoon. Being relaxed is one thing, being the last in the line is another. The Spaniards were extremely slow to accelerate from the start in a very gentle breeze and found themselves catching up while Italians Pietro D’Alì and Claudia Rossi aboard the ENIT squad found a personal flurry to pick up quickly the advantage over the chase pack. .

However, the ENIT team had held the lead in Stage 1 for much of the journey from Brindisi to Bari a few days earlier. Falling into a gale with the Belgians, the Italian crew could only watch the Spaniards pass them in the middle of the night. Altadill and Bauzà took advantage of a nighttime land breeze to grab the lead and take the winner’s cannon shot.

Little by little over the course of this afternoon, Team ESP made their way through the Stage 2 fleet, in terms of points the most important of the three stages that make up this inaugural World Championship. Bauzà and Altadill kept a route further west, closer to the Italian coast, making land their friend again. If you look at a map of Italy and see the “ankle spur” sticking out of the “boot of Italy”, it is the small seaside town of Vieste. That’s where the fleet was heading around 4 p.m. Monday afternoon, so close that they might as well have stopped at one of the harbor cafes to refuel on a double espresso. At this point, the Spaniards held a two-mile lead over a tight field comprising Belgium, Team USA Orcas and Team Sweden.

Perhaps it’s no surprise that Altadill has the upper hand. With 10 round-the-world races including a number of Volvo Ocean Races and around half a million miles under his boots, Altadill is the most experienced ocean racer in the fleet. Despite all this experience, however, he says it is the hardest thing he has done. “This running length means you can’t afford to sleep,” he smirked. “Not much anyway. It is very tiring, much harder than any round the world trip I have ever done.

As part of the winning crew aboard Groupama during the Volvo Ocean Race ten years ago, Martin Stromberg and his co-skipper Lennea Floser ordered a pizza early in the morning to take Team Sweden on board for the trip. While the pizza will be cold by the time they open the boxes, it’s that kind of culinary treat that keeps morale and motivation high during the toughest times of what should be a frustrating and slow stage. . The breeze should drop with the sun, which could be a long night at sea.

Some teams take a very scientific approach to racing, closely analyzing weather patterns. Others think that trying to understand the weather conditions in the Adriatic Sea is a waste of time. “We’ve never sailed the Adriatic before,” said Andrea Pendibene, who, along with Giovanna Valsecchi, Marina Militare rider in Team Italy. “We take a technical approach to make the boat as fast as possible, but the wind will take it as we go.”

The American crews, meanwhile, employed two of the best in the business as coaches for this competition. The husband-and-wife team of Christina and Justin Wolfe worked alongside fellow Seattle Jonathan McKee, best known as an Olympic gold medalist and America’s Cup veteran, but also as a crafty offshore competitor. For Erica Lush and Laurent Givry, the winner of the Volvo Ocean Race and one of the big names in the French offshore, Sidney Gavignet, offered his advice – not only on what to watch with the weather but also on the psychology of long distance running.

“I don’t think we could have done it without him,” Lush said. “He’s been phenomenal not only in training us with the boating, but in helping us understand the weather conditions here in the Mediterranean. We haven’t spent a lot of time running in this area. The psychology of the sport comes in a lot. in the doubles offshore and Sidney is an expert on it. I am really grateful to have had his thoughts on this campaign. “

Gavignet also appreciated the role of coach. “I wasn’t a coach when I was younger and I really see the value. It’s a lot harder job than I thought, but it was very interesting working with Erica and Laurent and help meet the challenges of this kind of ocean racing. “

Ocean racing can always be surprising, and a rogue wave seized Team GBR’s spinnaker stowed on the foredeck as the boat crashed upwind in the strongest conditions of the afternoon. Maggie Adamson and Gavin Howe stopped the boat and returned to retrieve the soggy sailcloth, but couldn’t reach it in time in their attempt to keep it from sinking under the waves. If there is downwind in stage 2, the lack of a spinnaker could cost the team dearly.

Like Stage 1 from Brindisi to Bari ahead of the weekend, this stage will likely be a test of patience and sniffing out the best with a thin breeze. Everyone agrees that the race to Ravenna is going to be slow, with the organizers anticipating between 48 hours and 60 hours of navigation.

The race continues to the Italian coast before rounding an oil rig about 50 miles from Ravenna and then back. If the breeze is unfavorable, the race committee may cancel this section and finish the boats earlier when they first reach the turn mark in Ravenna.

Is Dry Tortugas National Park worth a visit? This is why we say yes

Nominated for Boat of the Year 2022 >> Scuttlebutt Sailing News

The incredible Bond girl superyacht with stealthy design and cinema-inspired…