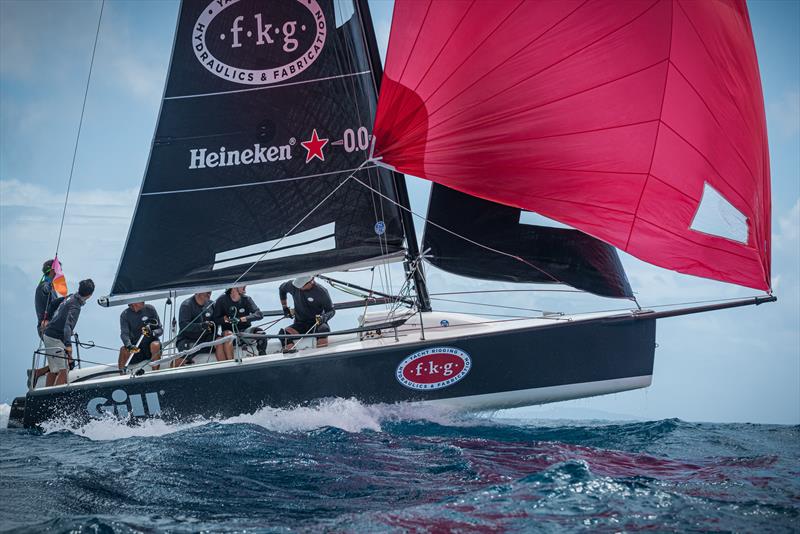 Team FKG, Melges 24, get a major air as they battle for an overall CSA5 class win at the St. Maarten Heineken Regatta © Laurens Morel

A dark cloud descended on Simpson Bay, just in time for the start of the race on the 4th and final day of the St. Maarten Heineken Regatta; but that did not spoil the fleet. The squalls ultimately blocked the start and finish of the race, making Mother Nature a formidable force in today’s races.

“Some Volvos came at top speed behind the line, it was the most incredible start – so exciting!” said Michele Korteweg, director of the St. Maarten Heineken Regatta, who had a front row seat to all the action today. “It was also the most beautiful bareboat start, all lined up so perfectly. Meanwhile the sports boats were finishing their leg behind us and Kick ‘Em Jenny was wiped out, having trouble getting their big green spinnaker down like a huge gust came in.”

By the end of the regatta, the bareboats were performing like pros. Many of them swung a reefing mainsail today, heeding the warnings of the many roundups the fleet suffered in yesterday’s breeze. The fleet managed to stay cool, calm and serene, and the untouchable Girl and Squeakybrat II held onto their first and second place overall class wins.

Squeakybrat II managed to clinch first place in today’s race, dethroning Girl from her otherwise undefeated record. Newcomers to the St. Maarten Heineken Regatta, Team Krabbegat/Asterias of the Netherlands, had consistent performances throughout the event, ultimately earning them the final podium spot in the regatta.

The Volvo fleet got off to a great start, but quickly crumbled at the windward buoy. VO70 I Love Poland missed the mark, while fellow countryman Ocean Breeze took it with them! Leading the pack, Il Mostro then rounded a phantom mark, while RC rushed to hoist the M flag to make himself the temporary mark. By the time the next fleet of Diam 24s arrived, the mark was unhooked from Ocean Breeze’s rudder, albeit a little further offshore than its original setting.

Diam 24 Karibuni appeared first to pass the mark, but was then overtaken by the very competitive Diams fleet. While having fun, this fleet of local boats are also all friends who have moved up to the one-design class to settle the score for the best sailors in the overall standings. Cry Macho skippered by Benoit Champanhac took straight balls through the regatta, Cry Baby skippered by class enthusiast Pierre Altier took every second, and Sint Maarten Yacht Club’s Merlin retained third place overall in multihull 3 .

In Multihull 1, Five Oceans (ORC50) was the undisputed champion, taking 1st place in every race of the event. Second place went to local multihull Arawak/Island Water World, who won their class in the 2020 St. Maarten Heineken Regatta. Today’s competition was a bit light, with more than half of their fleet absent from the starting line. Nonetheless, victory in Multihull 1 was well deserved by Five Oceans, who pulverized the Round the Island Race on Day 2, finishing alongside CSA1.

TP52, Jolt, was in a league of its own, piloting only one other boat in CSA4, but could generally be found lagging behind the Maxi fleet. Slightly too small to be included in the big boats, and too big and powerful for a medium fleet, the TP52 clearly needs a few more 52s to come and play with them, as this fleet is usually used to match-racing in the Mediterranean. So here is the official call for TP52s – come join us for some “Serious Fun!” in 2023!

In CSA2, a reliable group of Class40s have joined us again for their own dedicated class. Vicitan took first place in every race, despite having half the total team members on board compared to his competitors. You can tell these guys are real pros; this may be their first St. Maarten Heineken Regatta, but they come from world-class races like the Caribbean 600 and the Transat Jacques Vabre.

OMII, a new Swan 58, also took an impressive lead and came out on top in her CSA3 class, taking first place in every race. Competitor Isobel, a custom Stephens Waring 75, was unlucky in this event, today losing her mast following forestay failure on the leeward side of the island. Even though the race committee steered most of the fleet away from the windward side of Saint-Martin, the breeze still drove the fleet out onto the course.

In the sport boat fleets, CSA 5 and 8, the big breeze produced big air with the 24-34 footers flying out of the water on their lee legs. CSA 5 & 8 nearly doubled their race totals for the event, racing three sets of back and forths today. There were further mark mix-ups as part of the fleet rounded the large boat’s orange windward mark, instead of their designated yellow windward mark. It was certainly difficult for the fleet, with quite a few boats deciding to throw in the towel in the last race of the day.

The entire race fleet felt the excitement today, but no class held its breath longer than CSA7, who eagerly awaited their results from the day to determine the event’s final podium. Despite a few third places throughout the regatta, the Liquid team, J122, put in the most consistent performance over the four days, putting them in first place overall with just one point. Second and third place were tied on total points, taken by locals Beneteau First 47.7, Dauntless and J111 Spike.

“It was a good race for us. We got off to a full start on the first kite leg, smoking El Ocaso in the big breeze,” shared Liquid captain Julian White. Liquid owner Pamala Baldwin achieved her goal when she said earlier this week, “I came here to win.”

Now is the time to celebrate!! A serious crew has now been given the green light to grab an iconic green Heineken and enjoy their hard work with a cold beer. The celebrations continue after the awards show, in tonight’s Green Zone, where the after-party kicks off at Maho in Mykonos’ open-air nightclub. For the full fleet results visit yachtscoring.com and be sure to check out all the amazing media shared on @stmaartenheinekenregatta Instagram and Facebook.

Celebrating 42 years, this regatta just keeps getting better, four days of world-class racing with some of the world’s most seasoned sailors hailing from over 35 countries. This is truly a regatta for everyone, from professional crews sailing performance maxis, monohulls and multihulls, to vacationers on chartered bareboats, to families living aboard cruising the Caribbean. Crystal clear waters and refreshing northeast trade winds provide pristine conditions for spectacular racing just off St. Maarten. This event is your must-do list! Come enjoy life in the Caribbean; come and have some serious fun from March 3 to 6, 2022!

Beginner’s guide to chartering a yacht or boat