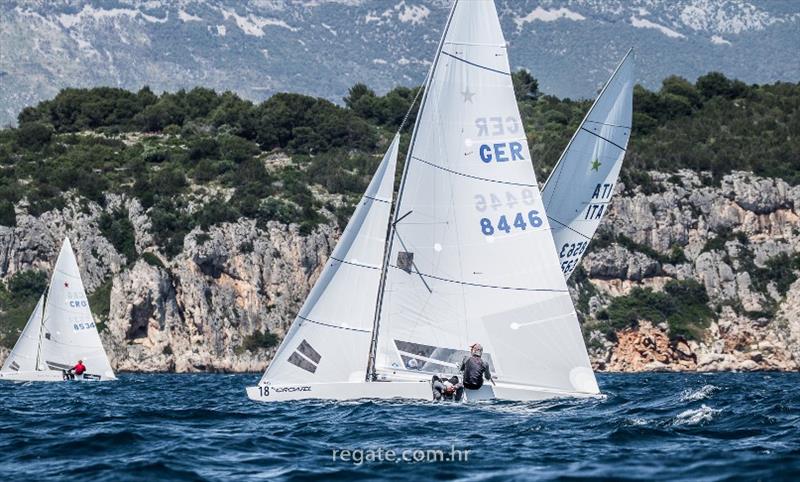 The Star Class World Championship returns to Kiel. After 1939, 1966, 1977 and 1993, the world’s best keelboat sailors will compete in the state capital of Schleswig-Holstein to crown their world champions.

“We are very happy to welcome the Star Class World Championship with us,” said Dirk Ramhorst, responsible for the organization of the Kiel Week and Kiel Yacht-Club regattas. Most recently, former Star World chairman, DSV chairman and KYC commodore Dierk Thomsen, who passed away in 2020, brought a European Star Championship to Kiel. “It was his boat, his class, we will remember him at the event,” said Ramhorst.

And Thomsen, who has repeatedly championed the star boat as an Olympic class, would have been delighted with this world championship, as participating sailors demonstrate the unique importance of the nearly seven-meter-long two-handed keelboat: A touch of the l America The Cup, the Ocean Race and the Olympics will pass through Schilksee when the 50 currently entered crews from 13 nations compete in Kiel.

The longest distance was recorded by the Argentinian crew Juan Kouyoumdijan / Fernando Rivero, who however live in Italy. Kouyoumdjian (born 1971) is a successful sailor and designer of racing and cruising yachts around the world. The Argentinian gained his first America’s Cup experience with the French team Le Défi in 1995 and was a member of the BMW ORACLE Racing design team at the 32nd edition of the America’s Cup. In 2020, he joined the Italian Prada team.

Personally, he has always remained loyal to the star boat. At the European Championship in Croatia, Kouyoumdijan / Rivero finished fourth.

The title of European champion was awarded to Enrico Chieffi / Ferdinando Colaninno (Italy). Chieffi took part as a navigator in the Louis Vuitton Cup, qualifying round for the America’s Cup (1992 and 2000), and has thus already tasted the atmosphere of the America’s Cup. The Italian also gained Olympic experience (1984 and 1996). Thus, Chieffi is automatically one of the favorites ahead of Kiel.

“The top ten is realistic, everything else depends on today’s performance,” Merklebach said cautiously. The 58-year-old has only been sailing with Kilian Weise (27) since last year. “Communication on board is good. Kilian brings the young and dynamic element on board, I can bring the routine,” says Merkelbach, who hopes the field of participants will continue to grow. The pandemic has particularly blocked entry abroad. “We are still recruiting from the United States and South America. I’m waiting for last-minute candidacies, ”said the class president. 60 to 70 crews are still expected before the registration deadline on August 7.

In May, the bronze medal was awarded to Augie Diaz, of Cuban descent, now an American citizen, who competed in the Barcadi Cup in Miami, United States, as well as the European Championships with “the reserve crew “and finished third each time. While at the European Championships it was the Austrian Hans Christian Nehammer, in the USA Marcus Koy became the star of Diaz.

Koy, a Wedel-born sailing professional, will now have to do without his odd job as co-presenter and expert on Kieler WocheTV, but with Danish coxswain Jörgen Schönherr, the two-meter is one of the favorites on the fjord. . In March, during the traditional Barcadi Cup, he demonstrated that the crew of the Star boat is familiar to him. Local hero Augie Diaz faced a situation without his Brazilian teammate, and Koy’s regular coxswain, Schönherr, was not allowed into the country due to the pandemic. Thus, the multiple world champion Snipe and Star (2016) and the multiple German champion came together and immediately won bronze.

At the European Championship in Croatia, Marcus Koy got back on board with Schönherr, but had to settle for tenth place. On his native waters, Koy now sets his ambitions higher. He has already tasted the America’s Cup and was a member of the United Internet Team Germany during the Louis Vuitton Cup in 2007. After that, the Sails of the North consultant focused on the Star and has already won three European Championship titles with three different coxswains – with Robert Stanjek (2008), Johannes Polgar in 2010 and Hubert Merkelbach (2014).

But the list of favorites at the Star World Championship is even longer. Chieffi’s compatriot Mario Borroi – with whom Frithjof Kleen (sixth Olympic in 2008) has already won victories – with Edward Wight on the table, Swiss crew Piet Eckert / Frederico Melo in eleventh in the European Championship last year in third in the European Championship, Johann Spitzauer / Hans-Christian Nehammer of Austria, and the Danish fleet of seven boats around Jörgen Schönherr are also expected to play a role in the awarding of medals.

The entry of strong men

After the Olympic elimination of the Finn, the bigger and heavier men do not have an Olympic boat class. Germany’s top Finnish sailors Phillip Kasüske (VSaW) and Max Kohlhoff (NRV) have therefore put an end to their Olympic ambitions and are now trying their hand at the old Olympic keelboat for two.

Max Kohlhoff signed up with Ole Burzinski for the World Junior Championship. Kasüske, who has just won the Ocean Race Europe from Lorient / France via Cascais / Portugal and Alicante / Spain to Genoa / Italy with skipper Robert Stanjek (Sixth Olympic Star boat in London 2012) as a grinder on board the ” Einstein “(IMOCA from Offshore Team Germany / owner Jens Kupahl), will compete with experienced crew Michael Schulz at the World Junior Championships as well as the World Championships. Kasüske / Schulz have already shown at the German International All-Star Championship (IDM) in June as sixths that they can compete and sail in the class.

Jan Borbet / Jesper Spehr (third in the IDM) are also in action in Kiel. The successful former 420 sailor from Remscheid Borbet was joined by Jesper Spehr (Malente-Gremsmühlen) as a crew.

“Our aim must be to bring new blood into the classroom,” says Helge Spehr, Fleet Leader Kiel Star, who sees the development of young people as the biggest challenge. With his son Jesper, efforts to attract young talent have already fallen on fertile ground. At the IDM in June, the son placed nine places ahead of his father. “A total of five junior crews made it into the top ten,” said international class boss Hubert Merkelbach, who is also pleased with the young German talent.

In the Junior World Championship, the coxswain must be under 30 years old. The program works only through sponsorship. “This includes boat, support and coaching opportunities,” says Merkelbach, who underlines the North German commitment based in Flensburg around Robert Stanjek, but he also looks to Austria. There, ten junior crews have already been found thanks to the non-profit “Future-Stars” campaign. The star owners provide their keelboats and support the juniors with their knowledge and manpower. The old class of Olympic boats (since 1932 with interruptions until 2016) shows possible paths in the development of young sailors, which also includes junior championships such as the world championships in Kiel.