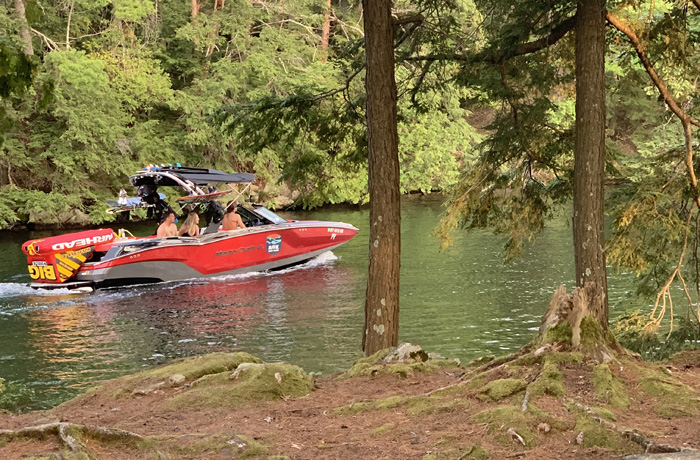 The boom in LG chartered boats for small vessels

Charter boat trips on Lake George aboard small vessels are on the rise.

There are now 56 approved tour boat operators on Lake George and their numbers are only growing, said Dave Wick, executive director of the Lake George Park Commission, in response to a Chronicle investigation.

Mr Wick said three had been added in recent months. “We only started tracking chartered boats in recent years,” he notes. “Traditionally, we only oversaw the marina operations that would operate full-size tour boats”, rather than the “trendy tour boat operations that are in your standard 26ft Cobalt”.

“From a public safety perspective,” says Wick, “we think this is definitely an improvement over the increase in rental fleets from the marinas we have around Lake George. So we see this as a positive point. We haven’t really seen a lot of negative points yet.

Mr Wick says, “We strongly prefer tour boat operators over rental boats because you have a licensed captain. We know where they work from. And we have a trace of it….

“Anyone who is new, or relatively new, has to go through the commission process to operate essentially as a tour boat on Lake George. It also makes sure that they have insurance, that they have the regular public vessel operator license, that sort of thing.

Don Daley, owner of Lake George Island Boat Tours, said: “The biggest problem we promote is that when you go out on a vessel with a captain, you are dating someone safe. When you go to rent yours, it’s the people who run into the rocks because they don’t know Lake George.

Mr. Wick cites a source of tension. “With the proliferation of large numbers of charter boats… tour boat operations… they started picking up a lot of people from the town docks in Bolton, here in the village. And so we get calls from the supervisors, the mayor, saying, “Hey, that’s not good. These people occupy space on the docks while waiting to pick up customers.

Mr Wick said: ‘We met all the tour boat operators on Lake George, I guess maybe three years ago, and we told them that any existing charters that can show they had been in business for a few years, we licensed them to operate.

Hearing from some of the LG tour operators

“All of our cruises are private and personalized, so there is no predefined itinerary. There’s no prescribed narration or anything. It’s more of a cruise and a boat ride, a historic tour by all means, ”said Ron Miller, who is in his ninth season as owner / operator of Love is on Lake George Cruises.

“I am a small niche market. Classic lake cruise with no water sports.

Mr. Miller said, “When I started there were fishing charters. And a few resorts had a boat. So they would have a PV [public vessel] as a seaside resort. There weren’t that many, just a handful of people doing what we’re doing now. Which only gives you boat rides and lake tours. It’s really exploded.

Don Daley is the owner of Lake George Island Boat Tours. “Well, last year was a banner year. And this year we’re actually a little bit above last year, ”he says. “I would like to have 10 boats.” He has two, plus a backup.

From Mechanicville, Mr Daley said he started his travel business three years after retiring. “I have a house by the lake. And I started this in 2016 when I said: You know, I love the story. I love being on the water… let me make it a little business. So my kids kind of set up the website for me, and one thing spawned another and it’s now booming.

“We personalize our trip. Yes, they can bring anything they want to eat or drink on the boat, as long as they are of legal age. They can drink alcohol, but we don’t provide it for them. We have coolers on the boat.

“My son is a captain and he tours. And then we have a few other captains that we hire… ”

“A lot of people like it,” she says. “They like to go out and have fun and not have the stress of driving a boat, or being able to have a drink without worrying.”

The three charter operators The Chronicle spoke to anyone who raised concerns about unlicensed tours.

Ms Mcintosh from ADK Boat Tours said: “The Park Commission has been amazing in trying to reduce the number of people we still call ‘poachers’. In August, I probably take 60 calls a day. And you can’t fill all the places you know, we’re booked. And so, people are trying every way they can to get on a boat.

“So they don’t know that the person picking them up hasn’t been inspected by the Park Commission or doesn’t have a PV license or insurance.”

“There’s a lot of – I don’t know what the term would be – illegal. What is happening is that there are people who are not public ships who have boats. And they are over there. And they get it either by referrals or by people who hire boats that say, “Well, here’s the captain, go ahead and call.” But you can’t do this.

“It’s a big problem this year because their boats are not certified public vessels like ours. And so they might not have the right life jackets, the right gear, the fire extinguishers, you know, they might not be prepared, or their captains might not be certified. And so we find out that we meet them, we see them there. “

Ms Mcintosh said: “It’s really hard because you have to get a license, so you need a Class A marina, and then you have to have a PV license in that marina, and there are very few of them and so with some of the small places closing, some of the other companies had to do it – they don’t have a business because there is no PV license. Its pretty hard.

She said: “I hope Lake George realizes this and thinks of other ways around it as more motels and things close, and we are losing more and more berths. “

Mr Miller said, “For Lake George, more people can come here and visit and get out on the water and enjoy the water, that’s good.”

“If the rental boats put them on the water, okay. If the photovoltaic operations bring them to the lake. OK. So it’s all good. I just think one or the other can get saturated or overwhelming on some of the popular sites.

“I’ve been to Paradise Bay and counted seven PV boats. And they all have swimmers in the water. And this is just saturation. And West Dollar Island can be worse.