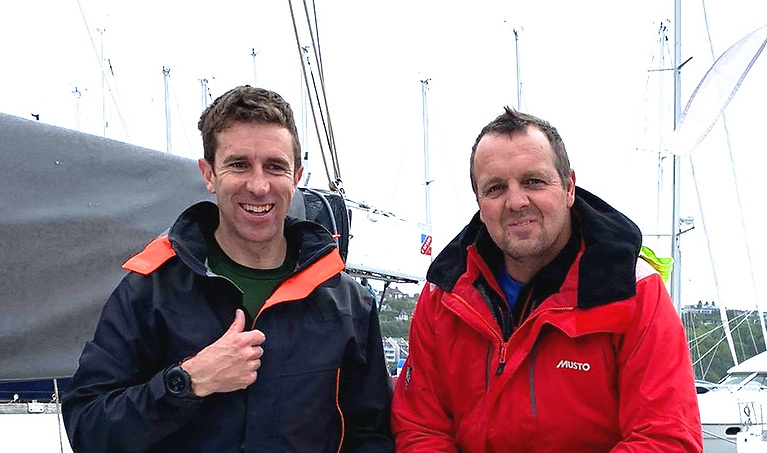 Kinsale’s top two-handed pilots Cian McCarthy and Sam Hunt with the Sunfast 3300 Cinnamon Girl appear to have had enough successful sailing already in the 2022 season to fulfill many crews’ ambitions for an entire year. And all this even though now – in mid-June – summer itself seems remarkably unenthusiastic about making a lasting appearance, when a cold, windy spring doesn’t realize it has long outlived its welcome.

On May 20, when the new 240-mile Inishtearaght race set sail from their home port, the two shipmates and their fully crewed rivals were sailing on what looked like a gloomy day in March. And although they found some sunshine off the south west coast using Inishtearaght for the first time as a racing landmark, by the time they got back to Kinsale the darkness had closed in again. But the Cinnamon boys hardly noticed, as they finished second on the water, took a strong first in corrected time and ended May as Afloat.ie’s “Sailors of the Month”.

Work done. Cinnamon Girl is back at Kinsale after circling the Blaskets, closing in on winning the Inish Tearaght race overall. Photo: Robert Bateman

But they were just getting started, as like all Sunfast 3300 crew, they are campaigning for the new top-tier boat whose public debut has been hit the hardest by the pandemic. Sure, Cinnamon Girl and other hyper-sharp offshore boats from Cork and Dublin Bay have been handling some sports with carefully restricted events like the Fastnet 450 during lockdown easings. Yet these were almost under-the-radar events, not at all like the hellish competition for leather you enjoy when testing a new boat with clearly high potential.

So the SSE Renewables Round Ireland race in Wicklow next Saturday has added appeal, with its feeling that the last of the restrictions are thrown to the winds. And for the Cinnamon Girl and boys, the past weekend saw the buildup pick up speed, with a record-breaking positioning move from Kinsale to the East Coast in which they spun for hours after hours at speeds of 15 to 21 knots, even managing to see a – albeit rather watery – sunset as they cruised along the Wicklow coast.

(Above) Cinnamon Girl at the weekend, making 15-21 knots as it passed Kinsale to the East Coast

It’s a tremendously experienced team. Cian McCarthy – having cut his teeth with Denis Doyle on Moonduster – raced the Mini Transat. He finished fourth in the first leg, but broke the forestay in the first week of the second transatlantic leg, but raced without a forestay for the rest of the crossing – possibly a first transatlantic crossing without a forestay. He’s also won the BT Global Challenge, raced Open 40s as well as numerous Commodores Cups and Admirals Cups, and has already done five Round Irelands – two double-handed.

Sam Hunt is also from Kinsale, with extensive experience in dinghies and keelboats. He was the only civilian on the British Army boat’s crew in the last four rounds of Ireland. Additionally, he had numerous match and team race victories, had a 470 Olympic campaign with Gerbil Owens in 2005-06, and also raced with the Mumm 30s on Mammy and the Melges with Team Barbarians, all recording successful experience in SB20 and 1720, and flying the legendary Tiamat in the IRC and Commodores Cup series.

Although this is Sam’s fifth tour of Ireland, it will be his first double, and he and Cian McCarthy seem to be merging into a formidable duo. They’ve boosted their outlook with in-depth sail information from Nin O’Leary, and now all they need to sail around Ireland is more of the conditions they experienced last weekend. to make Cinnamon Girl even more of a force to be reckoned with. .

Kinsale in the morning, sunset over Wicklow in the evening – that’s the kind of passage the Sunfast 3300 can achieve when conditions allow.

The ‘better worst idea’: Race from Washington to Alaska for the return of motorless boats