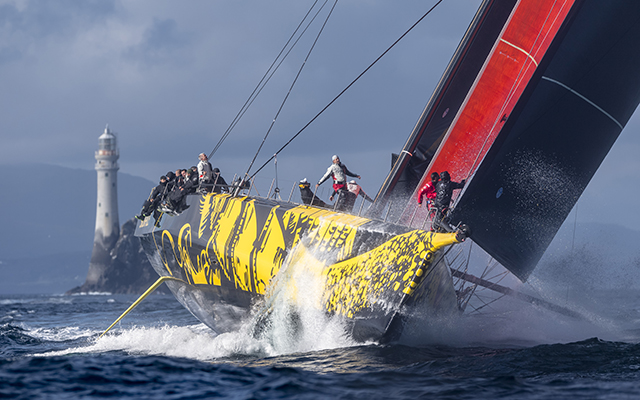 The ClubSwan 125 Skorpios, the largest yacht ever entered in the Rolex Fastnet Race, is the first monohull

The monolithic Skorpios, the largest yacht to ever take part in the Rolex Fastnet Race at 42.6m / 140ft, won the monohull line honors in the 2021 edition.

The ClubSwan 125 crossed the Fastnet finish line at Cherbourg as the first monohull at BST 2015 tonight, having completed the 695 mile course from Cowes to Cherbourg with an elapsed time of 2d 8h 35m 5s – and established a new reference time for the new format route.

The winning Skorpios crew, the first monohull of the Rolex Fastnet Race

Extraordinarily, owner Dmitry Rybolovlev was participating in his very first ocean race. Rybolovlev is a newcomer to sailing, although already a winner of the ClubSwan One Design World Championship, having raced his ClubSwan 50 in 2019.

Among the 27 crewmen on Skorpios was the daughter of Rybolovlev Anna Rybolovleva, who also experienced her very first offshore.

â€œWe are very happy with the boat,â€ she commented after finishing. â€œWe would like to thank the whole team for these great efforts.

â€œWe tried to be careful, especially in the strong wind at the start, but we can’t wait to see what the boat can do in the next races. Going around Fastnet Rock was a bit magical, it felt like a really special moment.

Skipper Fernando Echavarri confirmed that they were sailing carefully in the initially difficult conditions. â€œThe boat is very solid, we stepped back in speed on exiting the Solent, but so did everyone. “

While the spectacular black and gold ClubSwan 125 was always the favorite for the first round after the prize, victory was not assured. The very complex design, which carries a C-foil, has only recently been launched and this is its first outing in competition.

Surprisingly, their closest competitor was not that of George David Hiker 88, which won the last three consecutive monohull lines, but the IMOCA 60 Apivia.

Despite being literally half the waterline length of the Giant Swan, Charlie Dalin and Paul Meilhat made a daring boating call on Apivia, the first boat to cross the finish line of the VendÃ©e Globe, heading south of Guernsey on the outward journey.

This is a tactic that has been successfully adopted by Maxi Edmond de Rothschild, winner of the line’s honors in multihulls, as well as by many French IMOCAs, but Dalin and Meilhat took the most extreme line to the south, which allowed them to take a huge lead over the rest of the IMOCA class when the fleet reconvened off Lands End.

Apivia is expected in Cherbourg in the early hours of Wednesday morning, followed by Hiker 88.

Elsewhere, the first seat of the competitive MOCRA fleet, which hosts all multihulls after the giant Ultims, was Jason Carroll’s MOD 70. Argo, which finished at 3:22 p.m. (BST) this afternoon.

â€œThe start at 27 knots was spectacular, but everyone got off to a good start on the port tack and were safe, which was good,â€ said Brian Thompson, British multihull and ocean racer, who was on board. Argo.

On the other hand, Thompson says that the trimaran rounded the Rocher in Champagne conditions.

â€œIt was such a clear sky and a pleasant 10 knot breeze. The sun was shining, it was hot: it was Mediterranean navigation on the south coast of Ireland.

The first of the ‘cruising catamarans‘, The 84 feet of Adrian Keller designed by Nigel Irens Allegra is expected tomorrow. Although much more luxuriously fitted out than the preceding multihulls, the racer-cruiser Allegra competes with Australian Paul Larsen, officially the fastest sailor on the planet, as skipper.

â€œIt was quite fruity [on the first] night, but we’re all fine, â€Larsen reported. â€œObviously, we have a little more to manage in these difficult conditions, but we chose the right side of the course. We had everything stacked in the main saloon, all the sails and all the crew, which made it easier to pitch over the waves.

Tuesday brought a whole different story for many small boats in the IRC fleets. After a brutal and often breaking boat start, many found themselves struggling with dying winds and high tides off the south coast during the second day.

Brian Skeet and Nicolas Malapert in doubles on the Sigma 38 Marta past the starting point, only to drift back and have to pass it again because they were pulled back at the mercy of the tide.

â€œThere was absolutely no wind overnight – we were practically dead in the water,â€ Skeet described.

â€œWhen it was windy, we followed it everywhere. There was a lot of haze and fog that came in. It was quite a difficult job. There was no chance of kedging because it was too deep so we had to keep moving forward.

Tomorrow, the IMOCA, IRC Zero and IRC 1 fleets should start arriving in Cherbourg.