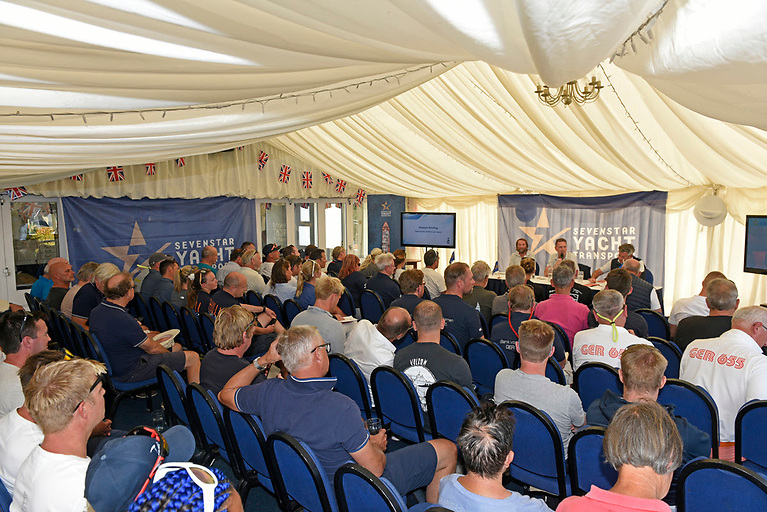 The Sevenstar Round Britain & Ireland Race starts today, Sunday 7th August. All 30 teams attended the skippers briefing held at the RORC Clubhouse in Cowes. RORC CEO Jeremy Wilton welcomed all competitors to the race: “This is the fifth edition of the race sponsored by Sevenstar Yacht Transport and on behalf of the Club and the teams competing, a great ‘thank you’ for your continued support.”

Race Director Chris Stone guided the competitors through the important aspects of the race, especially safety and communication with the RORC Race team. Meteorologist Chris Tibbs gave a detailed weather forecast for the race, summarizing the situation for the start. High pressure is expected giving a beat northeast of the Squadron Line, with the possibility of a light sea breeze developing later in the day giving a beat from the Solent. Wind speed should remain light, although some models indicate 10-15 knots from the southwest.

Libby Greenhalgh will be a sailor on the Oliver Heer Ocean Racing IMOCA. Skipper Ollie Heer will contest his first race with the boat he intends to contest in the 2024 Vendée Globe. the Sevenstar Round Britain & Ireland Race 2018.

“It’s a great opportunity for me to do an incredible race and support Ollie at the start of his Vendée Globe campaign”, commented Libby Greenhalgh. “The start looks rather calm with a light sea breeze. Some of the routing data suggests a push towards the French coasts, but there is still a long way to go to cross this windless zone. I think we will try to maximize the little wind we have and watch the current to optimize our position. There will be a key point when the wind returns to the gradient of the sea breeze. The first 48 hours promise to be hard work to make good progress, but we should see the slope return which should accelerate the race towards Ireland.

“It’s the first perfect race”, commented Ollie Heer. “I’ve had great experiences in the past and having a crew on board like Libby doing all the sailing will allow me to really look at the performance of the boat and how to improve it. We’re looking to take away as much learning as possible.

The Sun Fast 3600 Fujitsu British Soldier is equipped by the Army Sailing Association. Skipper Phil Caswell will be racing in his third race and navigator Will Naylor in his fourth. The seven-person team is serving in the British Army and Will Naylor estimates the team could complete the run in 11-14 days.

“The Sevenstar Round Britain & Ireland Race is the biggest race of the season; it’s really important to us,” commented Will Naylor. “It’s a fantastic sailor’s race because it’s as long as three Fastnets. We come from all walks of life, but one thing we excel at in the military is building a team. We’re good at being wetter and colder than anyone. As a team, we serve privates and officers, from Lt. Col. to privates, and the entire crew has put in the required miles. »

Christian Heermann will skipper an HSV crew on JV52 Haspa Hamburg. The young team comes from Germany and has the two youngest crew members in the race. Inken Borrman and Reemt Bruhn are both 17 years old.

“We had a windy sail to bring the boat here from Hamburg, but I really enjoyed it and as there was a place for me on the race I decided to join the race team,” commented Inken. Borrman. “I’ve never done anything like this before so it’s all new to me, but I’ve known Reemt since we were very young so it will be great to sail with him and the whole team.”

Reemt Bruhn comes from a family of sailors; his father and uncle raced Class40 Iskareen and his grandfather’s boats all had the same name. “Haspa Hamburg is such a powerful and fast boat that it will be exciting to race. The longest race I have done is the Fastnet and the start from Cowes is magical. Running this 1,800 mile course will be nothing but an incredible sight. I think we are going to be very proud as a crew if we can finish this race.

Sam White and Sam North are old friends but only recently started racing together on JPK 1080 Mzungu! “I think we are a really good team because Sam (White) is very good around the boat and in navigation, while I have tactical assets and we are a very good unit,” commented Sam North. “Just to finish would mean we’ve accomplished a lot in terms of preparing for the race and if we get a half-decent result I’d be really proud of that.”