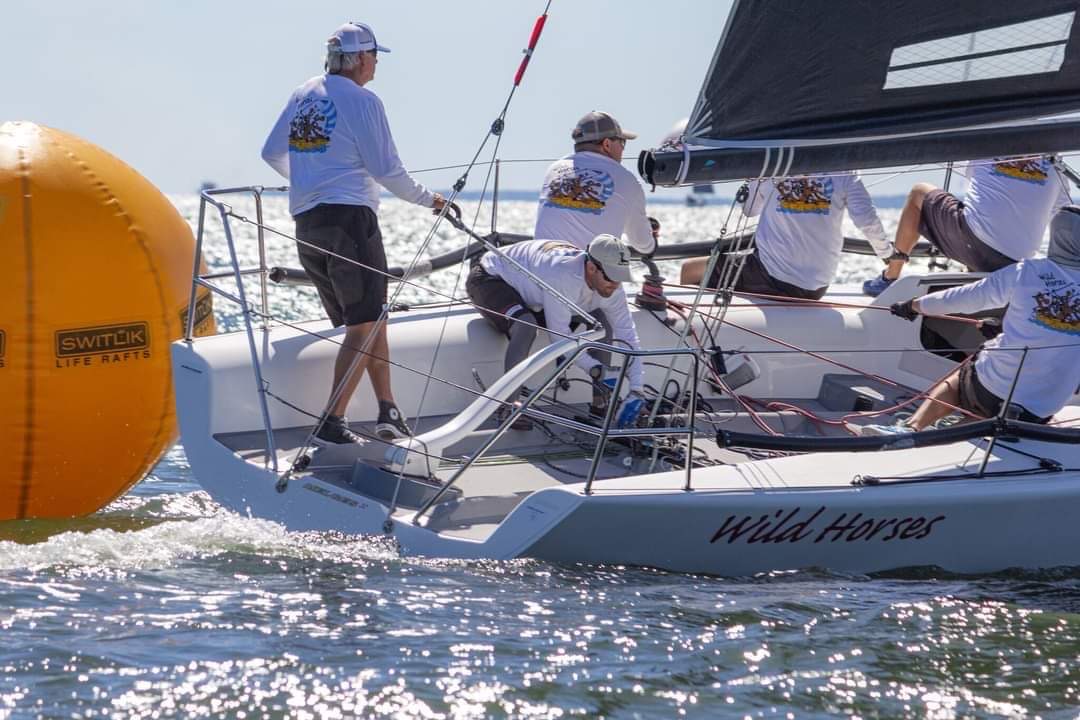 The wind in its sails – Bay Weekly

Salomon’s yacht Clarke McKinney is actively preparing for June’s Annapolis Bermuda Ocean Race. This will be the fifth time he has competed in the 753-mile Bay Race in Bermuda. But it will be the first time he will run with a special teammate: his son Neal.

The McKinneys are part of a team of six who have been working for the event since February. Both men, both from Leonardtown, are preparing themselves physically and mentally for all the potential challenges such a race demands.

“It’s 750 miles – pretty bare bones,” says the 67-year-old, who will serve as captain aboard the 40ft Old man, a Class40 mainly used for short-handed offshore and coastal racing. He hopes the speed potential will get the crew to Bermuda in three and a half days, a far cry from his first Bermuda race at Annapolis.

“The first time, it took us eight days to get there; we ran out of water; it was 120 degrees on deck midday and it took four days to get home. We had a single burner, a liter of water and freeze dried food.

McKinney says preparations for this race include many things such as obtaining safety equipment for the crew and ensuring a specific amount of water for each person. “All crew members must be certified in CPR and have medical knowledge to deal with issues on board. They must also be certified to have completed sea safety training; one crew member is given the responsibility to be the navigator.

Having spent her childhood summers in Ocean City, boating and fishing with her family, Clarke McKinney’s love of water is innate. When his parents built a summer home in St. Mary’s County, he and his brother’s priority was “water and the waves.” His dad bought two catamarans “to keep his boys out of trouble,” McKinney laughs. After high school, it was not uncommon to see the brothers using the family car to tow their boat to regattas.

When McKinney entered St. Mary’s College, he joined the sailing club. As he learned more about the sport his skills increased and he won his first race. “The hook was fixed,” he said.

McKinney was active in sailing pursuits, eventually becoming captain of the college sailing program. In 1979, he obtained a bachelor’s degree in natural sciences with a specialization in biology. “I probably had 12 credits in sailing lessons,” he adds.

Fresh out of college, McKinney applied for a position as a sailboat rigger at Zahniser’s Yachting Center in Solomons and was immediately hired. One of his first projects was to sew a canvas mast boot, and McKinney laughed as he described being pointed to a nearby barn where there was a Singer treadle sewing machine – the place where he perfected the skills that have earned him much success and accolades.

A year later, it was bought by two businessmen, and McKinney took over management of Leonard Sails, Solomons, Inc. His staff — a receptionist, a sewing machine operator, and himself — was a small start which started in a 500 square foot office. with a very small floor used to spread the canvas.

“It was a real sweatshop with no bathroom…” says McKinney. “We built sails for a 65ft schooner without being able to spread it out, so we did it in sections. I love puzzles.

Although McKinney is colorblind, he says he hasn’t had too many problems and it’s even a possible advantage when a couple disagree on a particular canvas color. “I tell them they have to figure it out themselves,” he says with a smile and mentions a large color variation that can include 12 shades of blue. McKinney admits he sometimes got stressed out when he used the wrong color. Still, “the staff know my shortcomings,” he says. “If I say it’s green, they’ll look for red or brown.”

McKinney’s know-how and his passion for sailing are closely linked. “My livelihood is my hobby and it’s good that I can continue like this,” he says. Throughout the year, McKinney estimates he spends 100 to 150 days on the water, having raced in the Atlantic, Caribbean and Mediterranean, as well as the Great Lakes, and cruising the Chesapeake. Over the years, family time on the water has included his wife, Mary Anne, two children – Neal and Allison – and grandchildren, ages 3 to 12.

Father and son share their excitement for the upcoming race. Neal McKinney says it’s “brilliant” to have the opportunity to bond with his father in their mutual love of sailing and to be part of “the experience of a lifetime”.

“It’s something we talk about all the time,” says Neal.