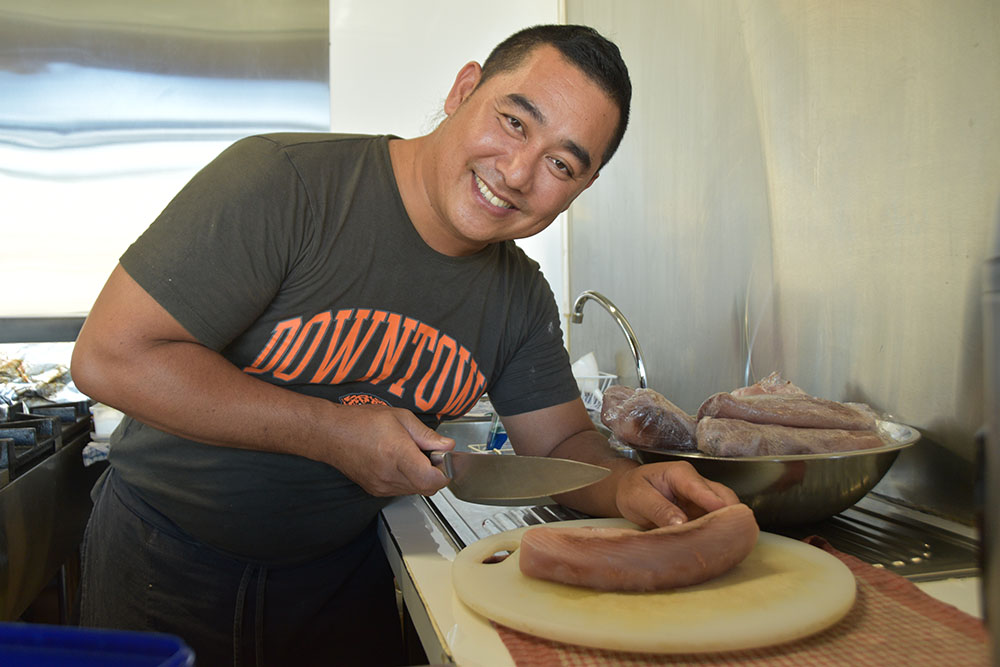 The “worst fish shortage it has ever been”

The owner of Ray’s Hut restaurant Ray Roumanu says there is currently a shortage of fish in Rarotonga. He stocked up on fish before winter and only has about 10 kilograms of mahi-mahi left. PHOTO: AL WILLIAMS / 21071912

Fishing boats mostly come back empty, some of those affected say it’s normal while others say it’s the worst it has ever been.

“We have never had such a low supply (of fish) before,” said Timothy Vaikai, owner of Fresh Fish Company.

He made these comments based on the 11 years of data that Rarotonga’s business has operated for.

The company acts as an intermediary between local fishermen and buyers.

Vaikai said some people believe the shortage is due to tourism demand, but the problem is entirely supply-side.

“At the moment, a fisherman only fishes one or two days a week,” he said.

It is normal for the fishing to be calm at this time of year, but Vaikai said it was much quieter than normal.

“We should have a lot of wahoo this time of year. We are in the midst of wahoo season right now and the wahoos are not here.

“For the visitors who are here, many are surprised that there are no fish.”

Beer said the cause of the lack of fish is not yet known, but believes global fishing and climate change may have caused the problem.

Williams gets fish once a week when Ocean Fresh opens on Fridays.

He managed to get some fish from Aitutaki last week, but even in Aitutaki he feels like things are slowing down.

As a backup, Williams said he would try to sell other seafood dishes like shrimp or maybe Hoki (fish).

Another restaurant owner, Ray Roumanu of Ray’s Hut, said: “No fish are common this time of year because it is the off season.”

“The fishermen have raised the prices and I can’t afford it,” Roumanu said.

When the border was closed, Roumanu stocked up on fish, but all that remains is his last 10 kilos of mahi-mahi.

Wahoo Fishing Charters owner Wayne Stewart isn’t too concerned about the slow pace of fishing. He said it happens once or twice a year.

“Every year is different,” said Stewart, “it doesn’t happen at the same time every year, but it does.”

He said people just need to smile and endure the slow times.

Vaikai said he felt a “moral obligation” to keep the price as low as possible.

At that price, the fish is still $ 5-10 cheaper than New Zealand, but the price difference is normally much larger, he said.

“I would hate for someone to come to the Pacific and buy cheaper fish in a big city.

“But if it stays that way, we’ll have to increase our price.”

The circular explorer begins his mission to clean up the ocean