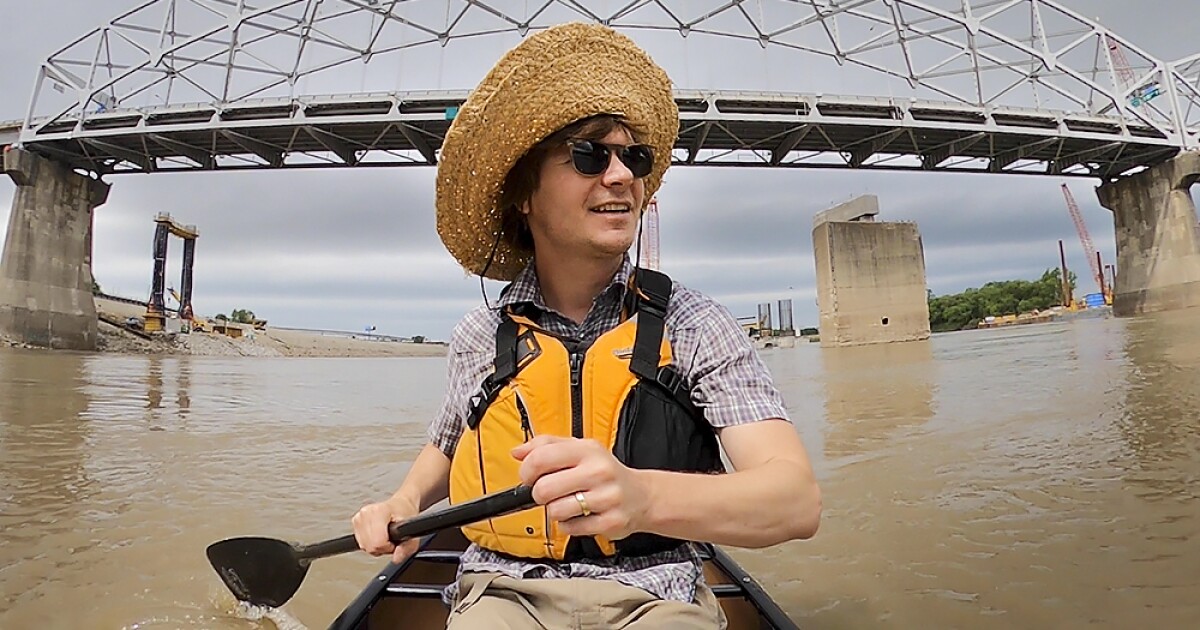 Steve Snell describes himself as an adventurous artist. His summer trip down the Missouri River, he says, will be his greatest adventure yet.

“There’s a certain type of romantic ideal in my head like, ‘It’s going to be beautiful.’ It’s amazing. It’s the dream of a lifetime,” Snell says.

“But I also know that there will be times – and probably many of them – when I’m very uncomfortable, tired and alone and I would just like to be back home with my family,” says Snell, who teaches in the foundations department. to Kansas City Art Institute but is on sabbatical until January.

Rivers often play a role in Snell’s adventures. Five years ago, inspired by explorers Lewis and Clark, he launched a cardboard replica of a keelboat on the Missouri River. And he once spent an afternoon wearing a raccoon-skin cap, paddling a wooden boat shaped like a sofa. He’s been doing these kinds of adventures as part of his artistic practice for about 12 years, but this will be his longest solo journey.

The Missouri is the longest river in North America. Along the way, Snell will paint watercolors of what he sees.

“I want to create a daily practice of waking up, having breakfast and doing a painting, packing my boat, going up the river, finding a camp, doing a painting, going to bed. And just everyday, you know, paint,” he says.

“I don’t know about the water other than it’s a line,” adds Snell. “What’s around the next bend? I don’t know. Yeah, maybe I have a map and I have an idea of ​​where I can dock or whatever . You go, but it almost happens to you.”

His work is inspired by American mythology, history and popular culture.

With so many hours on the river to fill, Snell came up with the idea for a project that would combine his interests and skills.

“I want to paint and I want to do a river video, and I’m a teacher, so why not do a painting exhibit that takes place on the Missouri River? It would be an adventure reality painting program, and I don’t think anything is quite as I imagine it,” he says. “As my first kind of concept was like Bob Ross and “The Pleasure of Painting”‘Meets Bear Grylls’Man against Nature.’”

Once back, Snell’s videos will be his way of sharing the experience.

“Just like Bob Ross, I can talk while I’m painting and tell people what I see along the way,” Snell says. “I’m imagining a series of episodes that will eventually come online and each episode a different place on the river, and you can see what the river looks like as I paint it.”

Many artists before Snell documented the beauty of the Missouri River. In 1832, the German naturalist and explorer Maximilian, Prince zu Wied-Neuwied traveled up the Missouri by steamer. He brought in the Swiss watercolourist Karl Bodmer to record the landscapes and people they encountered. Many of these watercolors are now kept in the Joslyn Art Museum in Omaha, Nebraska.

“His (Bodmer’s) landscapes are some of the most beautiful landscapes I have seen in this part of America,” Snell says. “Of course, it’s very different now, so I’m interested to see what some of these places look like now.”

Snell says he tries not to have too many preconceptions about what he will see.

“I even tried to avoid researching too much and looking at other people’s travels and landscapes,” he says, “because I want it to be all new to me and elicit that same sense of wonder. what it would do for anyone when you see something for the first time.”

He periodically plans instagram updates with messages from paintings and things he sees. He also has an adventure page on his website.

“I’m going to try not to overdo it because I really want to be on the river and not on social media,” Snell says. “But I also want to share the story with as many people as possible.”

He says he can’t wait to leave, but he’s realistic about the challenges ahead. And working alone for long periods in a studio is good practice for a trip like this.

“It’s a way of really being present in the moment,” Snell says. “I haven’t done it for three months, so I know it’s going to be tough. It’s all new to me.

Paddling the Missouri River can also be dangerous.

“I take it slow,” Snell said. “I am very careful. I’m not going to be a risk taker any more than I need to be. And, yeah, that’s the deal I have with my wife to be slow and conservative and paddle safe and I’ll come home.

But Snell says danger isn’t the message he wants people to take away from his Missouri trip.

“Don’t be afraid of the river,” Snell says. “It’s a beautiful river that’s great fun to paddle. And I think the more people that engage with our river locally and up and down, really, the better we all enjoy it.

Above all, says Snell, he seeks to head into the unknown.

“What I really love about these adventures is simplifying to the point that you get from point A to point B and whatever happens between encounters, the unknowns, that’s what’s exciting,” Snell said.

As people read this story, Snell is on day two of his trip — somewhere in Montana between Toston Dam and Canyon Ferry Lake, he reckons.

“I plan to come back to Kansas City in early September,” he says. “Mid-September at the latest.”

New signing charter from Natrona Outdoor Rec Collaborative on Wednesday; the group can help fund projects in the Casper area