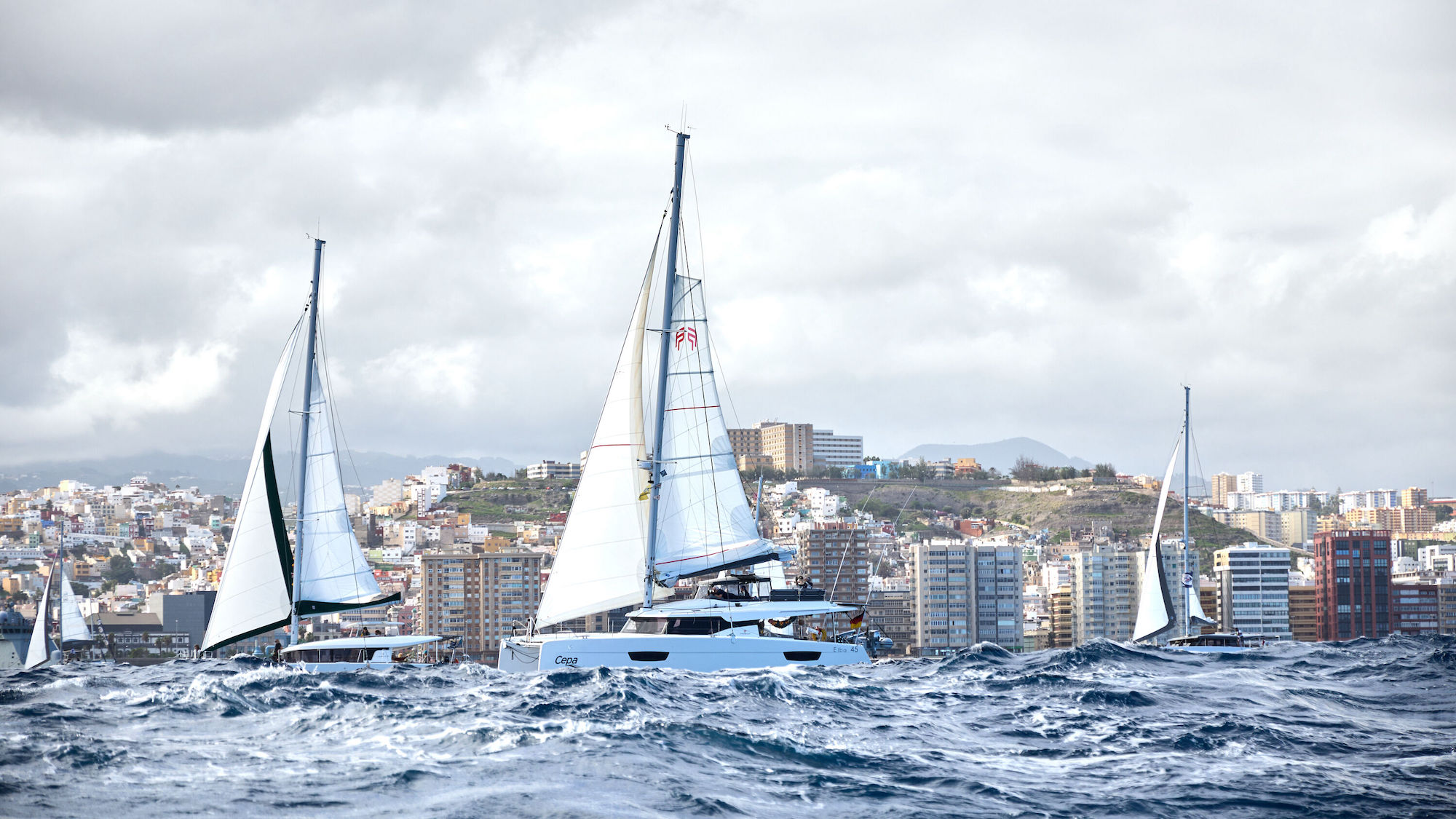 A northeast swell meant a rolling and uncomfortable start for the 138 yachts taking part in this year’s Atlantic Rally for Cruisers.

The fleet left Las Palmas, Gran Canaria yesterday for Saint Lucia during the 37th edition of the ARC, with more than 800 crew members, in monohulls, multihulls and a motorboat.

The long term forecast promises good trade winds for the 2,700 mile trip. However, strong gusts of wind created a 1.5m swell, causing some discomfort for boats on the start line. The wind was more easterly than typical for an ARC start, meaning it was a white sail reaching the start in winds of 18-20 knots, continuing at around 20 knots today today, with stronger gusts in the acceleration zone south of Gran Canaria.

The choppy start was in stark contrast to ARC+, the Atlantic Rally for Cruisers’ sister event, which started on November 6 and is now in its second leg from Cape Verde to Grenada.

Where is the ARC Acceleration Zone?

The acceleration zone extends 100 NM from Gran Canaria, where strong winds are channeled by the 2,000 m high mountains. Skippers will need to take precautions, reef early and sail further south sheltered from the strongest winds for the first 24 hours.

After that, the fleet should move towards more stable trade winds, especially south of the rhumb line, a pattern that should hold for at least the first week of the crossing.

A host since the first ARC in 1986, Las Palmas Marina has been living for a month, supporting first ARC+ participants and then ARC.

Participants explored Gran Canaria in the days leading up to their departure, which should take 18-20 days for the average cruiser.

Rally organisers, the World Cruising Club, carried out safety checks for each boat and organized a varied program of seminars and social evenings before the start, fueling the camaraderie of the rally.

PBO was in Las Palmas, Gran Canaria for the start of the ARC+, where we also met some of the skippers participating in the ARC. Bernie Kelleher of Virginia Beach, USA told us he was grateful for the new hardtop on his 46ft Hallberg-Rassy Circewhich should make starting up more pleasant.

“It’s amazing the difference it makes when you’re in bad weather,” he said. “You can hear the wind howling all over the deck, but if you come and sit in the cockpit below it calms everything down. It’s really amazing.

Chet Chauhan has owned monohulls all his life, but with his wife Jessie he chose a Nautitech 46 Open catamaran to do the ARC. He wanted a catamaran for tropical cruising, but ruled out some of the other designs.

“I don’t like sitting on a pedestal, I want a boat where you feel like you’re sailing, and where you feel the pressure on the rudder and the steering wheel, so we bought Navisana,” a- he declared. “Having said that, if we go back to England I’ll buy a monohull – they’re more fun to sail, but it’s a moving house.”

You can read more about Chet and Bernie’s offshore cruising modifications in the March issue of Practical Boat Owner, on sale January 19.

There was an emotional farewell as the marina in Las Palmas gradually emptied, leaving the pontoons bare for another year.

With the committee ship, the ship Armada española (Spanish Navy) Meteor in resort, the first departure was for the Multihull and Open Divisions.

Despite one or two reefs, the performance catamarans spun at the start at 5-6 knots, led by the all-electric catamaran ITA 14.99 Nanomole (MLT) skippered by Ulrik Bjerl Nielsen from Denmark.

Then a smaller than usual ARC racing fleet battled the swell on the coast line and it was a safe and steady start with many days of ocean sailing ahead.

Sao Jorge and getaway are both UK-based Sail Racing Academy charter boats, carrying guest crews with a professional skipper and mate on board.

Meanwhile, in the Cruise Division, Anthony Auger’s Oyster 665 London Patience (GBR) was at the front of the fleet.

A classic trade wind sail is expected as the boats head south before turning to point their bows towards IGY Rodney Bay Marina. From the youngest crew, aged just two, to the oldest skipper over 80, ARC sailors from 35 different nations will soon adjust to life on the waves after a rush of preparations before departure.

All ARC boats are fitted with YB Tracking satellite trackers, allowing family and friends to follow the fleet from the comfort of their own home via the ARC website or the YB Races app.

The departure of the ARC fleet sailing direct to Saint Lucia today means a combined total of 234 yachts will cross the Atlantic under the ARC banner in November 2022.

The ARC+ fleet of 91 yachts left Mindelo, Cape Verde, for the second leg of their crossing last Friday, bound for Camper and Nicholson’s Port Louis Marina in Grenada.

A further 43 yachts will join the second edition of ARC January, setting sail in the new year, in a third transatlantic rally organized by the World Cruising Club, sailing from Gran Canaria to Saint Lucia.

The huge Route du Rhum fleet gets underway: but Briton Sam Goodchild is injured, and…