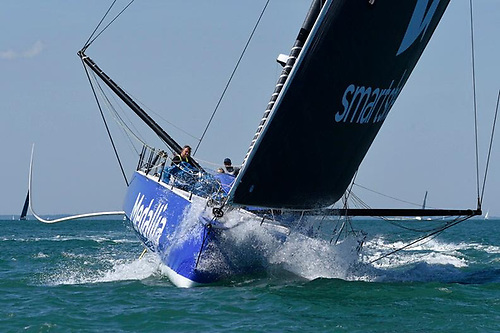 The 1,800-mile clockwise Sevenstar Round Britain & Ireland Race has been plagued by light winds and calms since setting out from Cowes this weekend, and most of the 30-man fleet still debating along the southwest and west coasts of Ireland with three boats now. retired.

Yet anyone taking a bird’s-eye view of the bigger picture could see that far out in the Atlantic there was a southwesterly draft heading towards the distant Shetland Islands, and many tacticians had just looking forward to trying to hold on to the edge of it.

But when you’re only doing a few knots, it’s an elusive goal. However, the valiant Pip Hare, having decided he was tired of watching the Blaskets from multiple angles from the deck of his IMOCA60 Medallia, headed northwest in a light breeze yesterday (Wednesday) evening, and that morning found it about 120 miles west of Donegal and doing more or less 11-12 knots towards the next bend at St Kilda.

The ploy confirmed its position as the clear line honors leader, 57 miles ahead of Ross Hobson’s Open 50 Pegasus of Northumberland of Blyth, a boat that is no stranger to racing around Ireland and is currently strengthening his knowledge of the Connacht coast near Slyne. Head, but making only 6.1 knots.

Racing around Ireland and also around Britain and Ireland seems to be addictive, with Polish skipper Kuba Szymanski setting the pace for participation with his Isle of Man based First 40.7 Polished Manx – he had already done the Royal Western’s Round Britain & Ireland in May and June. this year with a stopover in Galway, she is back, the most westerly of the fleet outside Medallia, but in her case she is still off Kerry having to make do with 3.6 knots.

Irish interest is spread across several boats, with James “Seamus” McHugh currently leading the Class40 and third in line with Tequila – his personnel selection is impeccable, as his shipmates are Brian Thompson and Alister Ricardson.

Also in Class 40, in this case aboard Andrea Fornaro’s Italian influence, is Pamela Lee of Greystones. But they have now withdrawn from the Kenmare River as the utter slow progress impinged on post-race plans. And another Class 40 with Irish accents, Antoine Magret’s Palanad 3 with James Crampton and James Murphy alongside her, also abandoned off Dingle Bay “for lack of time”.