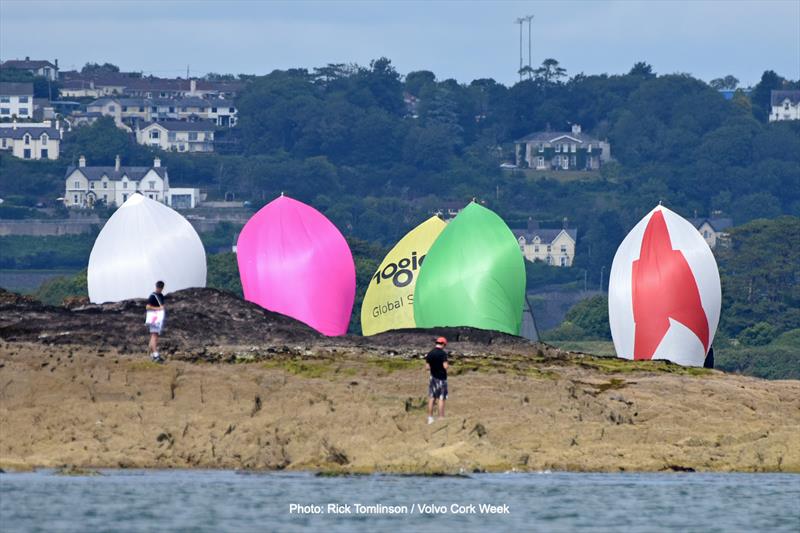 Day three of Volvo Cork Week incorporating the ICRA National Championships was blessed with sunshine and an 8-10 knot breeze from the north. The majority of the 192 teams competing were racing in Cork Harbor today, forming a riot of color from spinnakers in the scenic harbour.

Both Non-Spinnaker and IRC One classes started their long run in Ringabella Bay. The Cape 31 class and the Dragons had downwind races off Roaches Point.

White Bay on the east side of Cork Harbor near Roches Point was today the perfect racing area for the classic class. The elegant class includes boats over 100 years old, lovingly restored by their caretakers.


Echo One without spinnaker

Teams from the Royal Cork Yacht Club took the podium in today’s race in the Non-Spinnaker Echo One. Sweet Dreams of Batt & Helen O’Leary won the race by 88 seconds after a time correction from Rosmarina of Ronan Twomey. Mike MacCarthy Jolastan finished third.

Frank Caul’s Prince of Tides finished fourth today but still leads the class for the regatta, but only thanks to Rosmarina’s countdown and definitely in the mix is ​​Paul O’Shea’s Elegance, who is only a step away. a point from the class leader.

A special prize at today’s daily awards show went to the all-female team that raced Kerri Ann Boylan’s Cisco of Skerries Sailing Club. Cisco received a 500 euro voucher from Volvo Cars. Kerri Ann is an experienced coach having taught in both Nantucket USA and Ireland. The team grew by sailing against each other throughout the early years in the Optimist.

“We literally got the team together for Cork week and we’re improving our performance with every race,” commented Kerri Ann. “Cork week is a great regatta, very friendly with lots of people who love to race. We hope to encourage more women and girls to race keelboats. It has been fantastic to bring the girls together because we come from all over the Ireland.”

“So far so good,” Joker’s John Maybury commented. “We often race against Storm, Chimaera and Artful Dodjer, all of whom are well sailed J/109s. to not get wrapped up in a personal battle because there are a lot of good teams racing on other types of boats.

“Today as we finished ahead of Cobh, the race director dropped the gun and then threw the empty cartridge at us as we passed them. It was a nice gesture… It’s great to be back. back to Cork Week.”

Sam Laidlaw’s Quarter Tonner BLT of the Royal Yacht Squadron has won its fifth consecutive race and has a big lead in IRC Three. Quarter Tonner Illegal of Dorgan, Marshall & Losty of the Cove Sailing Club finished second again and are five points behind BLT with two days of racing to go. Marcus Ryan’s Irish youth team taking on J/24 HeadCase had another great run to finish third, just one point behind Illegal.

Jamie McWilliam’s Royal Hong Kong YC team with Ker40+ Signal 8 was today’s winner. Tactician Andrew McLelland was also celebrating his birthday! “We weren’t sure which direction to take on the first beat, so we hedged our bets and stayed in the middle of the course, which was a low-risk strategy,” commented McLelland, a licensed expert, but also a J/24 World Champion.

“Later in the race we made a few gear changes and just pulled away from the fleet, which is what we have to do as a scratch boat.”

Racing at Volvo Cork Week continues tomorrow with the penultimate day of racing for the regatta. Five racing areas, inside and outside Cork Harbour, will be hosted by the Royal Cork Yacht Club.

On the Water: It’s been a hot week on the water | News, Sports, Jobs