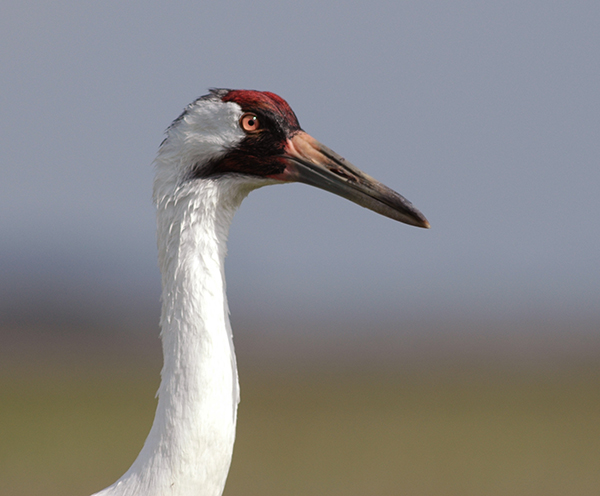 Whooping cranes have long white wings with black tips and fly with their necks and legs extended. Their wing beat is slower than that of white pelicans and snow geese, for which they are sometimes confused. Shooting fines for careless hunters often cost more than my truck. Whoopers overwinter in Texas from late October through April. (Photo by John Jefferson)

I started leading “photo safari workshops” at YO Ranch in 1981, their centennial year. The ranch had more than forty species of game from five continents. It was as close to an African photo safari as you could get in America.

I cherish these 15 years of facilitating workshops at the ranch. But could not drive them there during fall hunting seasons. This led me to Rockport and the rare and endangered whooping cranes. I didn’t realize it at the time, but Rockport ironically played a part in YO’s story.

During the 1800s, Captain Shreiner purchased a herd of cattle from a Rockport-area rancher who branded his cattle with his initials – YO – with the Y over an oval-shaped horizontal O. Being a practical man, Captain Schreiner didn’t want to re-brand all the cattle, so he bought some brand too. It became the start of the YO brand in the Hill Country

I found a man in Rockport who took tourists to see whooping cranes in an old boat that looked like a tugboat with a deck on top for viewing. It was an interesting old salt and looked like it had just come out of Central Casting. Everyone called him Brownie. He knew where the cranes were and had a fun crackle as we crossed the bay to the Intracoastal Waterway. His boat was slow, but he got us back and forth.

On my first outing trip, we saw six cranes divided into two family groups. They even “booed” for us. Leading a few trips each fall and spring, I learned more about coastal birds than ever imagined. When Brownie retired I booked charters with several others before settling on a skipper who had ordered a bigger, faster and better boat – more suited to our needs. We toured with him for five years. When he retired, the boat was purchased by Captain Tommy Moore, the current owner.

Captain Moore is highly qualified to manage the boat, identify birds and respect the weather. He is also very attentive to his passengers. The large cabin is comfortable in all conditions and has a toilet. I have been on his boat several times and have never been disappointed.

It has been gratifying to watch whooping cranes grow from the meager flocks that first migrated to Texas. The current population numbers 543 birds! It is a conservation success that involved many people, including the public and most people taking enthusiasts to see them.

Along with the 2,500-mile flight from Wood Buffalo Park in Canada, whoopers must dodge planes, battle storms, chemical spills, droughts and reckless hunters. No wonder they’re called “rare and endangered!”

Whooping cranes have long white wings with black tips and fly with their necks and legs extended. Their wing beat is slower than that of white pelicans and snow geese, for which they are sometimes confused. Shooting fines incurred by reckless hunters cost more than my truck!